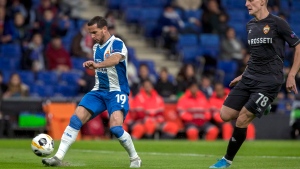 The 30-year-old Piatti leaves Barcelona-based Espanyol for Major League Soccer on a free transfer. Having passed a medical, he is slated to leave Saturday for training camp in California to join the rest of the team.

The search for an attacker by GM Ali Curtis and others has taken the club from South America to Europe.

“Pablo comes to TFC with an exceptional pedigree,” Toronto FC president Bill Manning said in a statement. “He brings big game experience to our team, having played in close to 300 games in (Spain's) La Liga, as well as competing in the UEFA Champions League.

“We believe he's the type of dynamic player who is going to enhance our attack and TFC fans are really going to enjoy watching him play.”

Piatti was in his fourth season with Espanyol, where he made 95 appearances with 14 goals and 19 assists in all competitions.

“Pablo is an experienced player that has exceptional character. We believe that he will fit very well within our group,” Curtis said. “His eagerness to join the team in Los Angeles as quickly as possible is indicative of his team first mentality. By adding Pablo to an existing strong attacking unit, we become a better team.”

Complicating the TFC search was a tweak to the designated player rules under the new collective bargaining agreement. While clubs can still sign up to three designated players, the league now has the right to limit the compensation for the third DP to the maximum targeted allocation money salary - unless the player is 23 years old or younger.

If that comes into play, Piatti's salary would likely be restricted to some US$1.6 million for 2020.

In comparison, Altidore made $6.33 million and Pozuelo $3.8 million last season

Piatti is no stranger to Toronto. In 2007, he won the FIFA U-20 World Cup at TFC's home stadium with an Argentine side that featured Sergio Aguero, Angel di Maria and Maxi Moralez.

His career since has featured highs and lows, with injury disruptions in the past.

The five-foot-four 139-pounder has an eye for goal and can score with both feet as well as set others up. He won a senior cap for Argentina in 2011 in a friendly against Poland.

Piatti started with Estudiantes in Argentina, making his debut at 17 in 2006 under Diego Simeone, now manager of Atletico Madrid. The diminutive Piatti turned heads with an injury-time headed winner in the game.

He moved with fanfare to Spain's Almeria in 2008. Three years later he was sold to Valencia after Almeria was relegated. He fell out of favour with coach Miroslav Djukic but returned to form after the Serbian departed and flourished under Portugal's Nuno Espirito Santo, now manager of England's Wolves.

Piatti was loaned to Espanyol in 2016. The Barcelona club eventually exercised his buyout clause to make the move permanent.

Toronto opens the MLS season on Feb. 29 at San Jose.