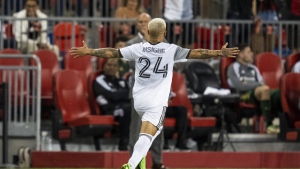 At $14 million, Insigne's annual average guaranteed compensation is $5.187 million (all figures in U.S. dollars) more than Chicago's Xherdan Shaqiri, who topped the May salary figures at $8.153 million.

Shaqiri drops to No. 2 in the latest salary figures, with Los Angeles Galaxy forward Javier Hernandez third at $7.444 million.

The players association says Insigne's $14 million is his annualized salary based on a partial-year contract. His full pay would rank him No. 1 among Maple Leafs and fifth among Raptors this season.

It is also $4 million more than Maple Leaf Sports and Entertainment paid for as an expansion fee prior to joining MLS in 2007.

Italian winger Federico Bernardeschi, who like Insigne joined Toronto in July, stands fourth on the MLS pay scale at $6.256 million. Fullback Domenico Criscito, another midseason Italian addition, is the next-highest-paid TFC player at $1.51 million — which ranks 57th on the league salary list.

Two former Toronto designated players are in the top 10 with Spanish playmaker Alejandro Pozuelo No. 8 at $4.693 million and Jozy Altidore No. 10 at $4.265 million.

Toronto traded Pozuelo to Inter Miami in early July and bought out Altidore's contract prior to the season in February. Altidore subsequently signed with the New England Revolution, who subsequently loaned him out to Mexico's Puebla in July.

In addition to the millionaires, TFC had 11 players making less than $100,000 this season.

Vancouver forward Lucas Cavallini is the highest-paid Canadian in the league at $1.463 million, followed by Laryea, Osorio and Toronto's Mark-Anthony Kaye at $700,000.

Midfielder Victor Wanyama is the top earner at CF Montreal at $3.092 million, followed by forward Bjorn Johnsen at $1.237 million.