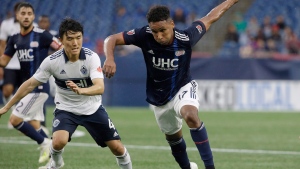 Toronto FC essentially got a little something for nothing Saturday, acquiring a third-round draft pick from expansion Inter Miami CF for the rights to Juan Agudelo.

Toronto had taken the former New England Revolution forward in Stage 2 of the MLS re-entry draft on Dec. 3. The team made the move knowing there was little chance meeting the salary demands of the U.S. international, who made US$605,000 last season.

Agudelo was the fourth-highest paid member of the Revs, who declined the option on his contract in November.

“Selecting Juan in Stage 2 doesn't ensure that he will be with us next year,” Toronto GM Ali Curtis said at the time. “Selecting him effectively gives us the right to have a conversation and try to negotiate a contract. If we do not reach an agreement with Juan, then he will be made available to other MLS clubs.”

That's what happened Saturday with Toronto getting the 2021 draft pick from Miami.

Agudelo, who has won 28 caps with three goals for the U.S., is coming off an unspectacular season that saw him play in a variety of positions for New England. He had three goals and two assists in 28 appearances for the Revs in 2019. Over his career, he has 46 goals and 22 assists in 215 regular-season appearances.

Agudelo scored in his national team debut at 17 in a 1-0 win over South Africa in the final of the 2010 Nelson Mandela Challenge in Cape Town. Six days shy of his 18th birthday, he became the youngest player in U.S. men's national team history to score.

In March 2011, he scored in his second senior game - coming off the bench to record the tying goal in a 1-1 tie with Argentina in East Rutherford, N.J.

Agudelo signed a deal with England's Stoke City in August 2013 but did not receive a work permit. He spent time with FC Utrecht in the Netherlands before returning to New England.

“Juan has several years of experience in and out of this league and still has a lot to give,” Miami sporting director Paul McDonough said in a statement. “He has shown that he's a very talented player and we feel he will add valuable depth to our squad.”

Bradley made $6.5 million in 2019, the final year of a $39-million, six-year contract. Current MLS rules have the maximum TAM salary at $1.53 million but that could change depending on the next collective bargaining agreement.

TFC officials have scoured both South America and Europe for a new DP.

This report by The Canadian Press was first published Dec. 28, 2019.