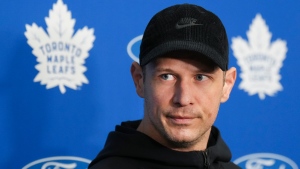 Toronto Maple Leafs forward Jason Spezza speaks to the media in Toronto on Tuesday, May 17, 2022. THE CANADIAN PRESS/Nathan Denette

The Leafs added to the news that Spezza would be joining their front office effective immediately as Special Assistant to General Manager Kyle Dubas.

"It is difficult to describe just how much of a lasting and positive impact that Jason Spezza made in his three seasons with the Maple Leafs," Dubas said in a press release.

"Jason's passion for the game of hockey, his desire to continuously push himself and his teammates to improve, as well as his capacity to make strong connections with all members of the organization, have been invaluable. Though today marks the end of his tenure with us as a player, it is a pleasure to have him join our front office to impart all that he has to offer."