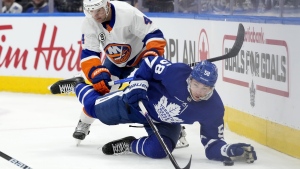 Toronto Maple Leafs left wing Michael Bunting (58) gets sent to the ice by New York Islanders defenceman Andy Greene (4) during second period NHL hockey action in Toronto, Sunday, April 17, 2022. Bunting had never seen a Maple Leafs playoff game in person until Monday night. If things continue to progress as planned, the Toronto native will be in the middle of the action for his second.THE CANADIAN PRESS/Frank Gunn

If things continue to progress as planned, the Toronto native will be in the middle of the action for his second.

And the feisty winger's impending return - whether in Wednesday's Game 2 against the Tampa Bay Lightning or later in the series - should add another layer of angst and intrigue to a first-round matchup that already boiled over late in the Leafs' resounding 5-0 opening-night victory.

“A player like Bunts is made for playoffs,” Toronto head coach Sheldon Keefe said following Tuesday's brief on-ice session. “He thrives on it, and I think he plays a lot of regular-season games like they're playoff games. That's part of what makes him successful, because he's playing with a higher level of intensity all the time.

“That evens out a little bit at playoff time because others bring their game up. But I wouldn't be surprised if Bunts has another level.”

A 26-year-old rookie playing for his hometown team, Bunting never had an opportunity to see former Leafs captain Mats Sundin go up against the likes of Ottawa Senators counterpart Daniel Alfredsson during their classic playoff battles in the flesh as a kid.

But he finally got a taste of Scotiabank Arena's raucous post-season atmosphere from a private suite high above the ice Monday.

“That was playoff hockey,” said Bunting, who had 23 goals and 63 points in 79 regular-season games. “I was sweating up there.”

Getting a player of Bunting's skill set - he provides tireless work and puck retrieval alongside the ultra-skilled Matthews and Marner - back in the fold will be a big plus as the Leafs prepare for a response from the two-time defending Stanley Cup champions.

“A guy that plays hard,” Toronto defenceman Morgan Rielly said. “He gets into corners, wins battles. He likes being involved.

“Looking forward to getting him back.”

Rielly was bearing some of the superficial scars from Monday's third period, which included a line brawl where the star defenceman was initially grabbed and punched by Pat Maroon.

After the hulking Tampa winger and Toronto blue-liner were separated, Rielly unleashed series of blows to the face of Jan Rutta in a subsequent scarp that left the Tampa defender with a gash on his forehead.

Rielly was caught by TV cameras examining his bloodied right hand in the penalty box in the immediate aftermath of the skirmishes. He practised Tuesday, but kept the appendage pocketed throughout his media availability as he tried repeatedly to downplay the incident.

“That's not obviously something I'm overly familiar with,” Rielly said of dropping the gloves. “Just a bit of a scrum â€¦ I didn't think there was anything offside.”

Keefe, who predicted a “borderline violent” series ahead of Game 1, said all his players have to be ready for moments like Monday's fisticuffs.

“You don't like to see those kinds of things â€¦ guys that aren't used to being involved in that, but you get (dragged) into it at times,” said the coach. “I think it was obviously, you know, somewhat calculated in that sense.

“But it is part of the game, and we're trying to win in the game and how it's being played.”

Maroon declined to comment on what led to the fracas, but indicated there's a good chance the bad blood will continue.

“Got to be ready and play a heavy hockey game,” he said. “And just go out there and do our thing.”

The Lightning's red-hot power play failed to gain momentum during a five-minute major for boarding handed to Kyle Clifford early in Monday's first period - the winger was assessed a game misconduct and suspended one contest by the NHL - before later surrendering a short-handed goal.

“We were probably a little lazy in some areas,” Cooper said. “We hoped for some plays instead of working for some plays. When you're rolling the way our power play has been for a while, when you turn around, you're expected to go to centre, not to chase a breakaway.

“Stuff that obviously we can't continue or it's gonna be a short series, but I don't expect that.”

Bunting, meanwhile, was hoping to get his first taste of live Toronto playoff action in Game 1.

If it happens Wednesday, he knows there's a line that he, like every other player in the high-stakes fray, will have to toe to be effective and stay available for his team.

“You can't let that take you off your game.”

KASE ON THE CASE

Ondrej Kase returned to Toronto's lineup Monday after missing the last 20 games with a concussion.

“It's never easy to go back in after an injury,” said the winger. “But the crowd was unbelievable â€¦ they helped me.”

Kase, who has a history of head injuries, impressed his coach after six weeks on the shelf

“Giving us everything he has on forecheck, backcheck and puck battles,” Keefe said after breaking down Game 1's video. “Thrilled that he not only played the game and got through the game, but he did it confidently.”

Kase also thanked members of the Toronto media for voting him as the team's nominee for the Bill Masterton Memorial Trophy, given annually to the NHLer who best exemplifies the qualities of perseverance, sportsmanship and dedication to hockey.

This report by The Canadian Press was first published May 3, 2022.

Toronto Maple Leafs left wing Michael Bunting (58) gets sent to the ice by New York Islanders defenceman Andy Greene (4) during second period NHL hockey action in Toronto, Sunday, April 17, 2022. Bunting had never seen a Maple Leafs playoff game in person until Monday night. If things continue to progress as planned, the Toronto native will be in the middle of the action for his second.THE CANADIAN PRESS/Frank Gunn