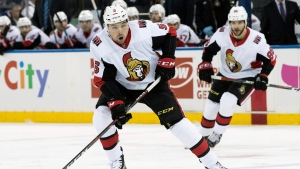 TORONTO - The Toronto Maple Leafs have signed two of their newest acquisitions to contract extensions.

Defenceman Cody Ceci agreed to a one-year extension with an average annual value of US$4.5 million, while forward Alex Kerfoot was locked up for four more years with an AAV of $3.5 million.

Ceci was acquired in a trade with the Ottawa Senators on Canada Day, while Kerfoot came over in a deal with the Colorado Avalanche later that night. Both were restricted free agents.

Ceci, 25, had 26 points (seven goals, 19 assists) in 74 games with the Senators last season. In 440 career games over six seasons, all with the Senators, the Ottawa native has recorded 118 points (32 goals, 86 assists) while adding three assists in 25 career playoff games.

Kerfoot, 24, had 42 points (15 goals, 27 assists) in 78 games for the Avalanche last season before registering three assists in 12 playoff games.