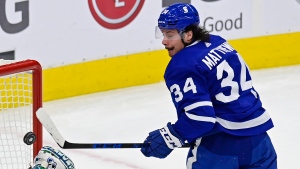 TORONTO - Auston Matthews was just starting to ramp up his summer training regimen.

On the heels of a regular season marked by personal success - and another crushing playoff failure for his Toronto Maple Leafs - the star centre believed issues with a troublesome left wrist were behind him.

Matthews underwent surgery on the joint Aug. 13, but is hoping to be ready in time for the start of the new campaign.

Looking relaxed and sporting a protective brace during Monday's Canadian leg of the NHL/NHLPA media tour in Toronto, the No. 1 pick at the 2016 draft added he expects to resume skating later this week before training camp opens Sept. 22.

The aim is to be good to go for the Leafs' season-opener Oct. 13 against the Montreal Canadiens - the team that battled back from a 3-1 series deficit to stun Toronto in the first round of the playoffs in May.

“I have a couple more weeks in this (brace),” Matthews said. “I'm hopeful to be ready by Game 1, I've just got to take it day by day and see what happens.”

Set to turn 24 on Friday, the sniper dealt with the nagging injury much of a pandemic-shortened 2020-21 campaign where he still scored a league-high 41 times in just 52 games to capture the first Maurice (Rocket) Richard Trophy of his career.

“It's nothing new,” Matthews said of the injury. “It's just kind of same thing.”

The timeline for a return to action provided by the team last month was put at a minimum of six weeks.

Asked why he waited until the middle of August for the procedure, Matthews said everything felt fine with his wrist's non-surgical recovery until he started to push things physically.

“After the season we did imaging and consulted (a specialist),” he said. “We just made the decision, 'We can go two ways, but it doesn't look that bad, and so maybe we'll just let it rest, let it heal and then see how it goes.”'

Matthews was in full agreement and comfortable with that course of action before realizing he still wasn't right.

“I had a great summer, everything was good,” he said. “Started skating in July and then I started ramping up skating a little bit in August, and it just didn't feel right. I decided to get another second opinion.