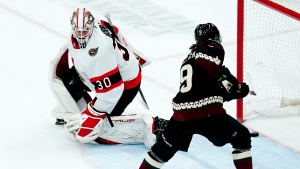 TORONTO - The Maple Leafs intense pursuit of netminder Matt Murray is over - the 28-year-old Ottawa Senators netminder is leaving the nations capital and heading to Toronto.

In the playoffs, the Thunder Bay, Ont., native owns a record of 29-21 with a 2.18 goals-against average, a .921 save percentage and six shutouts. Murray was a part of Pittsburgh's Stanley Cup championship teams in 2016 and 2017.

In international competition, Murray helped Canada capture a silver medal at the 2019 IIHF World Championship and suited up with Team North America at the 2016 World Cup of Hockey.

Murray was originally selected by the Penguins in the third round (83rd overall) in the 2012 NHL draft.

This report by The Canadian Press was first published July 11, 2022