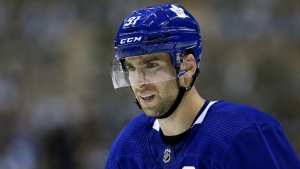 Forward Alex Steeves and defenceman Carl Dahlstrom were recalled from the Toronto Marlies of the American Hockey League.

The Leafs cancelled their practice at the University of British Columbia earlier Friday for precautionary reasons.

Toronto was supposed to play in Calgary on Thursday, but that game was one of four involving the Flames postponed this week with 32 members of the organization - including 19 players - in protocol.

The Leafs say all players and travelling staff were tested Thursday for COVID-19 in Vancouver. The club was informed of the test results Friday morning, and each individual will undergo additional testing.

Toronto is scheduled to play the Vancouver Canucks at Rogers Arena on Saturday before visiting the expansion Seattle Kraken on Sunday.

The NHL has seen a rash of players enter into protocol this week as the fast-moving Omicron variant propels the pandemic's latest wave.

The league has been forced to postpone 11 games so far in 2021-22, including six this week.

This report by The Canadian Press was first published Dec. 17, 2021.