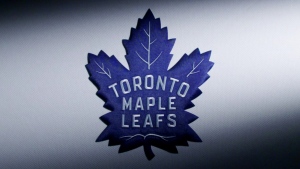 The New Toronto Maple Leafs logo is seen in this image released by the team.

TORONTO - The Toronto Maple Leafs have finally made their first selection of this year's NHL entry draft, choosing forward Matthew Knies with the 57th overall pick on Saturday.

A native of Phoenix, Ariz., he came into the draft as the No. 37-ranked North American skater and has committed to playing at the University of Minnesota in the fall.

Toronto dealt its first-round pick to the Columbus Blue Jackets in April in exchange for forward Nick Foligno.

The Leafs are thin on selections in later rounds, too, holding just the No. 153 and 185 picks.

The Leafs dominated the North Division through the pandemic-condensed 56-game season, posting a 35-14-7 record before the Montreal Canadiens eliminated them from the first round of the playoffs in a tightly contested seven-game series.