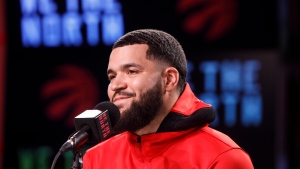 TORONTO - Scottie Barnes and Precious Achiuwa were added to the NBA's COVID-19 protocols by the Toronto Raptors on Tuesday, hours after teammates Fred VanVleet and Malachi Flynn were sidelined.

There are now seven Raptors in league protocols.

Toronto (14-15) was set to host Orlando on Monday night but that game was postponed due to a COVID-19 outbreak on the Magic.

Raptors players were limited to individual training sessions on Monday, with one player working with one coach at a time.

Toronto is scheduled to play in Chicago on Wednesday night.

Nik Stauskas of Mississauga, Ont., Brandon Goodwin, Juwan Morgan, and Tremont Waters have been signed by the Raptors from the G-League under the NBA's hardship clause.

This report by The Canadian Press was first published Dec. 21, 2021.