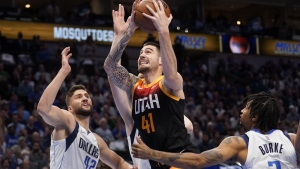 Former Utah Jazz forward Juancho Hernangomez (41) goes up to shoot as Dallas Mavericks' Maxi Kleber (42) and Trey Burke (3) defend in the first half of Game 2 of an NBA basketball first-round playoff series, on April 18, 2022, in Dallas. The Toronto Raptors have signed Hernangomez. Terms were not disclosed, but ESPN reported the deal is for one year. THE CANADIAN PRESS/AP-Tony Gutierrez

Terms were not disclosed, but ESPN reported the deal is for one year.

Hernangomez was picked 15th overall by Denver in the 2016 NBA draft. He holds career averages of 5.4 points, 3.4 rebounds and 15.7 minutes in 297 games (66 starts) with Denver, Minnesota, Boston, San Antonio and Utah.

This report by The Canadian Press was first published July 28, 2022.