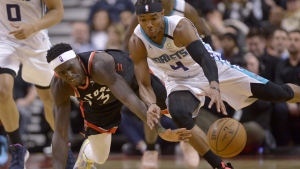 Toronto Raptors forward Pascal Siakam (43) and Charlotte Hornets guard Devonte' Graham (4) vie for control of the ball during second half NBA basketball action in Toronto, Friday, Feb. 28, 2020. The Raptors are headed south to prepare for the resumption of the NBA season.THE CANADIAN PRESS/Nathan Denette

TORONTO -- The Toronto Raptors have gone to Dunk City to prepare for the resumption of the NBA season.

The defending champions were scheduled to charter Monday to Florida where they will train in the Fort Myers area. The club will continue its voluntary individual workouts at Alico Arena, home of the Florida Gulf Coast University Eagles.

The school became known as Dunk City or Florida Dunk Coast in the 2013 NCAA tournament when the Cinderella Eagles became the first 15th seed to reach the Sweet 16, upsetting Georgetown and San Diego State along the way. The Eagles turned heads with a high-flying 21-2 run in the second half to sink the Hoyas.

Raptors players and staff will move to the “NBA campus” at the Disney complex in the Orlando area in early July to further prepare for the stretch run.

“In keeping with NBA and team safety protocols, there will be no group workouts during this phase of return to play, and strict protocols have been designed to ensure this initial level of access will take place in a safe, controlled, and healthy way,” the Raptors said in a brief statement announcing their departure.

“Group workouts will only begin once teams have reported to the NBA campus at Disney.”

Other teams are slated to ramp up workouts in their home markets, arriving at the NBA campus July 7, 8 or 9. Seeding games will start in late July with the playoff opening in mid-August.

Toronto's flight to Florida came the same day that the Orlando Pride announced it was withdrawing from the NWSL Challenge Cup, slated to start Saturday in Utah, after six players and four staff members had tested positive for COVID-19.

The Raptors did not make anyone available to speak to the media Monday. Some of the players were already in the U.S., having elected to go home during the suspension of league play.

Teams can bring up to 35 people as part of the basketball operations group, which includes players, a senior executive, an athletic trainer, a strength and conditioning coach, an equipment manager and security.

The teams will stay in one of three Disney hotels with the Raptors joining the Bucks, Lakers, Clippers, Celtics, Nuggets, Jazz and Heat at the Gran Destino Tower at Disney's Coronado Springs Resort.

Tuesday marks the league entering Phase 2 of its health and safety protocols related to the resumption of the season. That includes mandatory high-sensitivity coronavirus and antibody testing, with the virus test to be repeated every other day and the antibody test repeated only in the event of a positive virus test.

The number of COVID-19 cases in Florida has been on the rise in recent days, spiking on Saturday at some 4,700 although the number dropped to some 2,800 on Sunday according to the Florida Department of Health, Division of Disease Control and Health Protection.

The Miami Herald reported that more than half of the state's known cases were in South Florida's four counties: Miami-Dade, Broward, Palm Beach and Monroe.

Orlando is in Orange County, which had 5,035 positive cases among residents and 122 for non-residents as of Monday morning according to state statistics. There were 49 deaths.

Fort Myers, located some 260 kilometres southwest of Orlando, is in Lee County, which had 3,581 positive tests among residents and 85 for non-residents. There were 149 deaths.

The Raptors last played March 9 when they won 101-92 at Utah to extend their win streak to four games. Toronto (46-18) stood second in the East, behind the Milwaukee Bucks, when the league suspended play due to the global pandemic.