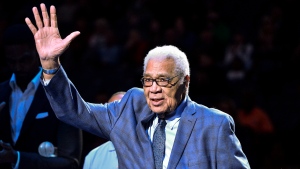 The Toronto Raptors paid homage to Hall of Famer and the team's senior adviser Wayne Embry on Friday.

The players arrived at the arena in T-shirts bearing Embry's likeness and the words “Because of You” ahead of the Raptors' game versus the Boston Celtics.

Coach Nick Nurse, who wore the shirt in his pre-game Zoom video availability, explained the phrase “because of you” comes from words U.S. President Barack Obama wrote to late civil rights leader John Lewis, who died on July 17.

On the day Obama took the oath of office, Lewis asked him to sign a commemorative photo.

Obama wrote: “Because of you, John.”

“With the passing of John Lewis here recently, one of our members of our leadership team came up with this fantastic idea to honour some living legends, that did some historic things,” Nurse said. “And Wayne Embry, right in our own organization, was one of those, becoming the first African-American general manager, then the first African American team president.”

Embry, who isn't at Walt Disney World for the NBA's restart from the COVID-19 hiatus, won an NBA title in 1968 with the Boston Celtics, and is a five-time all-star. He went on to become the NBA's first Black GM with Milwaukee in 1972. He was also presented with the National Civil Rights Museum's Sports Legacy Award.

“I think it's fitting because we've got Masai Ujiri as a team president as well, and that's kind of symbolic for Masai to say 'Because of you Wayne,”' Nurse said.

The Raptors coach hopes other NBA teams in he NBA's bubble take their idea and run with it, by honouring other great leaders in the league with similar nights of recognition.

“And I just want to say personally that (Embry) is a true joy to see and be around and talk to for me, either in person or on the phone, or via text,” Nurse said. “He's just a warm, genuine, great leader, gives me great advice, makes me feel comfortable, always encouraging.

The death of George Floyd in May sparked an uprising in the U.S., and a major theme of the NBA's restart is amplifying the message of racial and social injustice.

Eight of the game's 10 starters were Black, including Bill Russell, one of the most vocal athletes during the civil rights movement.

Embry told The Canadian Press recently that he's “saddened, angered, and quite frankly terrified” by recent events including police brutality against Black people in the U.S.

“We thought things were well, and things got well in the late 70s and early 80s, we started to see progress, corporate America opened up, I think we saw great progress. And I think it continued on into the 90s,” Embry said. “But in recent years, it's just amazing, somehow we've regressed. It's sad to see.”

Embry, whose wife Terri participated in the first march from Selma to Montgomery, Ala., on March 7, 1965 - known as “Bloody Sunday” - is an important voice, Nurse said.

“I think a lot of our own eyes and ears have been opened a little bit more, and our players' have been too. For them to, now, get to talk to him, and for us to tell them 'These are the things that Wayne Embry did. These are the situations,”' Nurse said Friday. “And I think it just hits home a little more now with the change in landscape for the team.

“It's, again, it's too bad that's the way it is, but it is a positive that's come out of this, that the awareness of everybody to receive information more, and respect it.”

This report by The Canadian Press was first published on August 7, 2020.