A cipher off the floor, Kawhi Leonard opening up a little in NBA playoffs 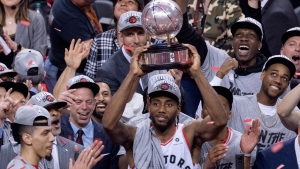 Toronto Raptors Kawhi Leonard hoists the trophy after the Raptors won theEastern Conference Final against the Milwaukee Bucks Toronto on Saturday, May 25, 2019. THE CANADIAN PRESS/Frank Gunn

TORONTO -- Kawhi Leonard has been showcasing his many talents throughout the NBA playoffs. He has also given us a glimpse of something new -- a smile.

The stoic Raptors star usually shows little emotion. On the court, he is relentless. Off it, he is a cipher.

"He's as even-keeled maybe as I've ever seen," Toronto coach Nick Nurse said Saturday prior to the Game 6 win over Milwaukee that sent the Raptors to a first-ever NBA Finals.

While teammate Kyle Lowry wears his heart on his sleeve -- he has never met a referee's call he likes -- Leonard offers little. If he doesn't get the call, the most emotion he'll show is likely an upraised hand and slightly quizzical look.

The Raptors offered up a different side of the 27-year-old Californian on their Twitter feed the day of Game 5 Thursday in Milwaukee. Under a smiling emoji, it showed separate photos of Leonard, Serge Ibaka and Chris Boucher smiling.

Leonard is shown sitting down, tying up a shoe -- with a beaming smile. It's as if the happy twin brother had joined the team.

And another grin as Leonard and Lowry shared the post-game podium in the wake of the history-making 100-94 win over the Bucks. It came after Lowry was asked how this group had managed something no other Raptors team had accomplished.

The point guard cracked a smile, looked left at Leonard, then broke into a laugh, looked at Leonard again and continued laughing. Leonard happily grinned back.

"The one thing about Kawhi, and you guys all know it, is he literally stays level-headed all the time," Lowry said admiringly. "He never gets up, he never gets down. He showed some emotion after Game 7 against the Sixers. But I think him and Danny (Green) brought that championship pedigree here, just kind of staying level-headed and even-keeled."

In the same news conference, Leonard deflected praise from team president Masai Ujiri, who called him the best player in the league during the post-game trophy ceremony.

"I don't really judge my game like that. I'm more of a team aspect, see what my team is doing. I just want to win. I don't care about being the best player. I want to be the best team. I've always said that."

And Leonard offered a glimpse inside about what it means to get back to the finals after a bitter split with the San Antonio Spurs following a 2017-18 season in which he played just nine games due to a quad injury.

"It's great. I worked so hard to get to this point with the season I had last year, just always betting on myself and knowing what I feel and what's right for me. I ended up coming here with a great group of guys, a lot of talent. And I just strived with them every day. I just kind of bought into their system . . . All that hard work just put together. Now we're here and it's exciting."

For some, Leonard's reticence -- he is polite with the media but rarely opens up -- is frustrating. Fans want to know everything about their stars in this era of social media and non-stop news.

But for others, it's refreshing. You pay to see his marvellous basketball skills, not his private life or innermost thoughts. Sometimes less really is more.

Leonard's numbers are remarkable. He is averaging 31.2 points, 8.8 rebounds, 3.8 assists and 1.6 steals a game in these playoffs. Throw bodies at him and he will feed teammates. Or muscle his way free.

He can ignite a building, as he did Saturday night with a spectacular fourth-quarter one-handed dunk over the six-foot-11 Giannis Antetokounmpo off a Lowry steal.

"We kind of were on a run and why not feed the big dog," Lowry explained. "Let the big dog eat."

Another dunk attempt did not go as well, with an Antetokounmpo block. Leonard crashed to the floor, his arm pinned awkwardly below him. He remained on the ground, looking up with interest as teammate Pascal Siakam retrieved the ball and rammed it home.

Then Leonard got up and head back down the floor. No fuss, no muss.

With seconds ticking down, Leonard sacrificed his body again to pull down a Siakam rebound from a missed free throw. He beat Antetokounmpo and seven-foot Brook Lopez to get it.

Fouled in the process, he went to the free-throw line and closed out the scoring with the final two points of his 27-point, 17-rebound, seven-assist night. It was only fitting.

Leonard will serve as an interesting counter-point to Golden State in the finals. The star-studded Warriors, in their fifth straight finals, are basketball royalty and some of them are always ready to share.

Draymond Green burns like a welder's torch. And the equally talented Klay Thompson does not hide his feelings.

Informed this week that he had not made any of the NBA all-star teams -- Leonard was voted to the second team -- Thomson looked puzzled and then pained.

"It is what it is. I can't control it," he said, after noting he respected those who did get the nod. "Do I think there's that many guards better than me in the league? No. But that's the reason why we're still playing, so what can you do?"

While Oakland is some 3,600 kilometres from Toronto, Leonard and Thompson are a million miles apart.

The Raptors star may be opening up a bit, but there are still questions to be answered.

Fans are dying to know whether Leonard, the third-highest paid Raptor this season at US$23.1 million (behind Marc Gasol and Lowry), will be back next season.

But a smile and visit to the NBA Finals will do for now.