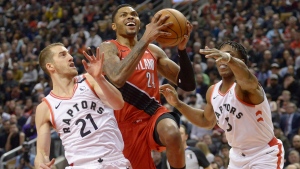 TORONTO - Carmelo Anthony's dagger with 3.3 seconds to play was part of a 28-point performance and lifted the Portland Trail Blazers to a 101-99 victory over the short-handed Toronto Raptors on Tuesday.

Kyle Lowry had 24 points and 10 assists for Toronto (24-13), while Serge Ibaka finished with 17 points and 11 rebounds. Oshae Brissett and Chris Boucher chipped in with 12 points apiece.

Leading by nine points to start the fourth, Boucher scored four consecutive baskets - for 10 points - for Toronto to almost single-handedly snuff out a burst by Portland. The Blazers continued to rally though, and Anthony's three-pointer pulled the Blazers to within four points with 5:19 to play. Brissett responded with a three, then caught a long pass from Lowry to put Toronto back up by seven with 3:59 to go.

Threes by Lillard and Anthony made it a three-point game with just 1:46 to play, then Lillard connected on a long three from the logo with 37.5 seconds left to tie the game. Portland regained possession after Patrick McCaw fired a bad pass meant for Lowry that went out of bounds. Anthony shook loose to score with 3.3 seconds left, then Lowry's three bounced off the rim at the buzzer.

The Raptors were missing four of their top seven players. It was Toronto's 10th game without injured Pascal Siakam (groin), Marc Gasol (hamstring) and Norm Powell (shoulder), and the first without Fred VanVleet who injured his hamstring late in the Raptors' 121-102 win in Brooklyn on Friday.

“It's gonna be a little bit before we know exactly how long,” VanVleet might be out, coach Nick Nurse said before tipoff.

The Raptors have been clobbered by injuries this season, losing Ibaka to 10 games (ankle) and Lowry to 11 (thumb) earlier in the season. A television camera captured the magnitude of the Raptors' injury predicament during the game, with a shot of Powell, Gasol, Siakam and VanVleet all seated together in suit jackets.

Nurse insisted he hasn't let the mounting injuries frustrate him.

“I don't like to live frustrated. I don't get out of bed saying, 'Oh, darn, Fred's not playing tonight.' I just gotta accept what you got,” he said.

Matt Thomas scored eight points in his first NBA game since Nov. 23. The 25-year-old guard, who brushed the rust off the previous night by playing with Raptors 905, Toronto's G League affiliate, missed 21 games with a broken finger.

The Raptors held Portland to 28 per cent from the field, and just 12.5 per cent from three-point range in the first quarter. Toronto's bench - Patrick McCaw, Thomas, Stanley Johnson, Brissett and Boucher - closed the quarter with an 8-0 run and led 24-15.

Lowry led the way with 10 points in a second quarter that saw the Raptors go up by 14 points on a cutting dunk from Rondae Hollis-Jefferson. Toronto took a 56-46 advantage into the halftime break.

Back-to-back threes from Anunoby had the Raptors up by 12 early in the third. The Blazers saw Kent Bazemore pick up two technicals and get ejected late in the quarter. The Raptors led 78-69 to start the fourth.

The Raptors are in Charlotte on Wednesday, then return home to host DeMar DeRozan and the San Antonio Spurs on Sunday.

This report by The Canadian Press was first published Jan. 7, 2020.