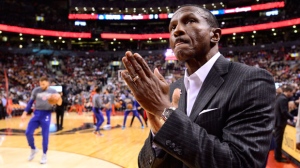 Former Toronto Raptors coach and current coach Detroit Pistons Dwane Casey arrives on court before NBA action Toronto on Wednesday Nov. 14, 2018. Casey said it was strange being back on the Toronto Raptors basketball court where he'd left so much "blood, sweat and tears." THE CANADIAN PRESS/Frank Gunn

AUBURN HILLS, Mich. -- Dwane Casey had nothing but positive things to say about the fact that his former team just won the NBA title.

Casey coached the Toronto Raptors for seven seasons but was fired last off-season -- even though he'd just guided the Raptors to a team-record 59 wins and would eventually win coach of the year honours. Nick Nurse took over, and Toronto won its first championship this month.

"It was exciting. It was good to see," said Casey, now the coach of the Detroit Pistons. "To see a guy like Kyle Lowry, kid like Pascal Siakam, Fred VanVleet and those guys -- Serge Ibaka, guys I coached -- win. It was really thrilling, because I know that was a goal going in with that group, and to see them win it was great."

Casey was at the Pistons' practice facility Friday, when they introduced first-round draft pick Sekou Doumbouya. When asked about the Raptors, he also said he was happy for the fans.

"For that city to win a championship, it had to be thrilling for them," Casey said.