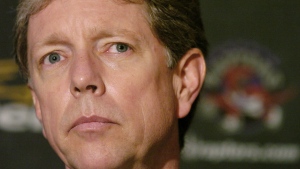 The Minnesota Timberwolves, the team with which Babcock spent the bulk of his time in the NBA, confirmed Babcock's death on Twitter.

Babcock, who had been battling pancreatic cancer, was hired as the Raptors GM on June 7, 2004 and lasted a year and a half in that role.

His time at the helm will be tied to one of the most infamous events in Raptors history. In December 2004, Babcock traded disgruntled superstar Vince Carter to New Jersey for Alonzo Mourning, Eric Williams, Aaron Williams and two first-round draft picks.

The return for the face of the franchise was meagre at best. Mourning refused to report to Toronto and was eventually bought out, heading south to win a championship with the Miami Heat. The other players and the draft picks failed to make much of an impact.

Prior to the trade, Babcock drew heat for drafting Brazilian big man Rafael Araujo with the eighth-overall pick in the 2004 draft. With the next pick, the Philadelphia 76ers selected Andre Iguodala, who would go on to help the Golden State Warriors win three championships.

After another mediocre draft in 2005 -- Babcock selected Charlie Villanueva and Joey Graham while leaving future all-star Danny Granger on the table -- Babcock was fired on Jan. 26, 2006 and eventually replaced with Bryan Colangelo.

Babcock did add one of the most popular players in Raptors history when he signed Spanish point guard Jose Calderon before the 2005 season.

Babcock also spent 12 seasons in the Minnesota Timberwolves front office before joining the Raptors, and returned there after being fired by Toronto. He was eventually promoted to the role of vice president of basketball operations in Minnesota before being fired in May 2016.

Born in 1953 in Phoenix, Babcock was head coach at Phoenix College before moving on to the NBA in 1987 as a scout for the Denver Nuggets.