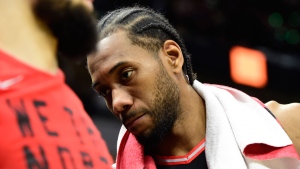 Toronto Raptors forward Kawhi Leonard (2) reacts at the end of Game 2 of the NBA basketball Eastern Conference finals against the Milwaukee Bucks in Milwaukee on Friday, May 17, 2019. THE CANADIAN PRESS/Frank Gunn

Leonard, who has now made the all-defensive team five times, is the first player in Raptors history to receive the honour.

Among players with at least 100 steals, Leonard and Jimmy Butler of the Philadelphia 76ers were the only players in the NBA to record more steals (106) than personal fouls (87).

Leonard earned his third career all-star selection this season and was twice named Eastern Conference player of the week.

Leonard, Antetokounmpo and Bledsoe will be back on the court Thursday for Game 5 of the NBA Eastern Conference final. The Raptors and Bucks are tied at 2-2.

Toronto shooting guard Danny Green was close to a spot on the second team with 19 first-team votes and 28 second-team votes from the global panel of 100 sportswriters and broadcasters for 66 total points. He earned more points than both Green and Leonard, but as only two guards are permitted per team he fell short of Thompson's 82 points and Holiday's 90 points.