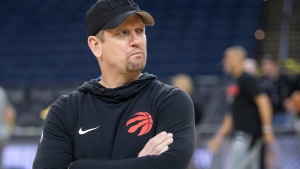 Toronto Raptors' head coach Nick Nurse keeps an eye on the action at practice for the NBA Finals in Oakland on Tuesday June 4, 2019. THE CANADIAN PRESS/Frank Gunn

TORONTO - Nick Nurse is thankful now that he had a high school basketball coach who preached shooting ad nauseam.

“We had lots of form shooting. It used to drive us bonkers,” said Nurse, who attended Kuemper Catholic in Carroll, Iowa. “When we were younger, 14 or 15 years old, we didn't understand why we had to do it every day, go up and down and bomb threes . . . We were shooting off the wall with no basket and all of that stuff.”

The Toronto Raptors coach parlayed those tedious shooting drills into one of his first jobs out of college at Northern Iowa.

“I was running shooting camps for a long time,” Nurse said Tuesday. “I always think that the more you teach something, the better you learn it.”

That teaching has turned the Raptors into the third best team in the NBA in true shooting percentage which measures two and three-point percentage plus free throws. It also is obvious in the long bombs OG Anunoby was knocking down in the Raptors' 132-96 rout of Charlotte on Monday night.

Anunoby scored a career-high 24 points - including four threes - through just three quarters. He sat out the fourth after being whacked in the eye by a flailing Nicolas Batum elbow. Anunoby is shooting 53.2 per cent from distance this season, up from just 33 per cent last year.

“He's put the work in,” Raptors guard Fred VanVleet said. “I remember when he first got here, they would put him on the side court and shoot with him everyday, all day, form shooting. And to see him go from there to now where he shoots it, and he's shooting side-steps and pump-fake threes, and to see a game like last night where he got hot, it's really good to see.

“(Shooting) is one of the few things where if you work on it, you can see direct results, fast, and that's something that we've seen with OG.”

Asked who the team's 'shot doctor' is, VanVleet pointed to Nurse.

“He's the one crazy enough to study all the dynamics that go into shooting,” VanVleet said.

The Raptors' OVO Athletic Centre is tricked out in high-tech analytics equipment, including the Noah Basketball system which provides instant feedback on shot measurements such as the arc and depth of shots.

“There are a lot of things we can pull immediately,” Nurse said. “We try to evaluate after each game. If there's anything that's really leaping out to us on straightness, depth, arc, are they taking the right shots. Sometimes that's a big factor, too: How open are they? We have a lot of guys on our staff, too, that are good at it, that are 'shot doctors.”'

Like Anunoby, Pascal Siakam wasn't exactly lauded for his strong shooting when the Raptors signed him in 2016. But the 25-year-old is taking 6.4 three-point shots a game this season, almost four more than last year. He made three of six against the Hornets.

And according to Nurse, the best is yet to come for the athletic forward who won last season's most improved player award.

“I say it all the time, with Pascal, he shoots the ball pretty well. But he's still 18 months or 24 months away from being really good,” Nurse said. “There's some years that go into it . . . you guys have seen a lot of guys that have come into this league and all of a sudden they're 30 years old and they're unbelievable.”

The endless shooting work showed in Terence Davis's game on Monday. The rookie scored 16 points in a four-minute fourth-quarter outburst, connecting on four of his five shots from behind the arc.

Davis said his shooting might have been a knock against him through the NBA draft process.

“I think I was like 37 per cent my senior year (at the University of Mississippi),” Davis said.

The 22-year-old worked on it throughout the summer, and now works with Raptors assistant Jim Sann.

“Oh yeah. No doubt, no doubt,” Davis said. “From just getting my arm right in front of me, having a gateway where you can see the rim.

“You have coaches that really focus in on things like that, development,” he said in praise of the Raptors. “Toronto is one of the best development teams in the NBA. Anything with development, your shot, ball-handling, anything of that sort.”

The Raptors (9-4) host the Orlando Magic (6-7) on Wednesday. It's the second game of a significant home stretch that has Toronto playing seven of nine at Scotiabank Arena.