Nurse: This is a historic opportunity to make some lasting change. 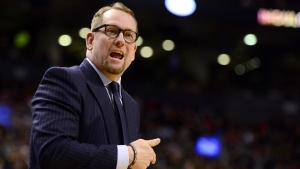 TORONTO - The Toronto Raptors may finally get a chance to resume their title defence if the NBA restarts late next month in Orlando.

But coach Nick Nurse said since the death of George Floyd two weeks ago, and the global anti-racism protests it sparked, basketball has been the last thing on the minds of his coaches and players.

“Everybody's kind of held their hands up and said we all need to do better, we all need to make this more of a focal point, we all need more of an important role,” Nurse said on a conference call Tuesday. “The last 10 days, two weeks have been pretty much constant discussion.”

Nurse was among the league's head coaches who participated in a Zoom call on Saturday. A sub-committee including Lloyd Pierce, Gregg Popovich, Steve Kerr, David Fizdale and Stan Van Gundy was then formed to determine some action plans.

“There is a historic opportunity to make some lasting change and I think we all have to take part in that,” Nurse said.

The coach said the team has had thoughtful discussions that have led to a deeper understanding and “maybe even a closeness amongst our staff and players.”

“It was several personal examples that maybe guys hadn't shared with their teammates or with me, and I guess as it hits closer to home, these guys talk about being pulled over by police, and how they were treated - lots of stories that for whatever reason they didn't talk about really before,” he said.

Several players posted photos and video on social media of weekend Black Lives Matter protests they attended, including Kyle Lowry, who was among the massive crowd in his hometown of Philadelphia.

The Raptors were second in the Eastern Conference at 46-18 when COVID-19 forced the league to shut down on March 11.

The league is tentatively scheduled to restart on July 31 with 22 teams based at Disney World. Each team would play eight games to determine seeding for the playoffs, which would see traditional seven-game series. The final would be held in October.

While players are scheduled to report to teams by June 21, Nurse said it's not determined where the Raptors will convene.

“We've kind of thought about several scenarios and gone through each one of those, we haven't really made a final decision on a date to reconvene or where we're going or any of that kind of stuff yet,” Nurse said. “We've made plans on both sides of the border.”

He said the key to coaching will be flexibility. And he said it's important the team maintains a positive attitude.

“It's probably going to feel different than you expected it to and then you're going to have to start making adjustments. Your attitude day-to-day is going to get challenged in a different way, so how are you going to be able to - for lack of a better word - keep people from just complaining? 'Man, it's too hot, the sun's out,' or 'It's too cold, the air-conditioning,' whatever.

Nurse said the Raptors are fortunate to be both a good home and road team, so they should be “good in neutral” as well.

“This team loves to play, we love to compete, we love to try to figure things out, and at the end of the day everything else that's going on when you finally get there and the ball goes up, can you laser focus in and get the job at hand done?”

Nurse said while there has been little talk of playing, he's confident his players are in decent shape. There have been weekly weigh-ins, and no “red flags.” There was a photo of a trimmed-down Marc Gasol making the rounds on social media recently, and Nurse said Gasol's face has looked slim on Zoom calls.

“I think both him and Kyle look good,” he said.

Gasol had played just 36 games this season due to a nagging hamstring injury. He's one of several key Raptors players to miss sizable chunks of this season.

Nurse can't wait to have a healthy Gasol back in the lineup.

“He's a huge pillar on both ends. He's back there on defence directing traffic, protecting the rim, talking, getting guys through screens. He just does everything back there defensively and most of it's with his experience and his IQ,” the coach said.

“I would also add this too - I thing Marc (being) so in and out this year has really made Serge (Ibaka) play a lot better. Serge has been better, he's improved, he's got more opportunities, so I think that's only going to help us.”

This report by The Canadian Press was first published June 9, 2020.