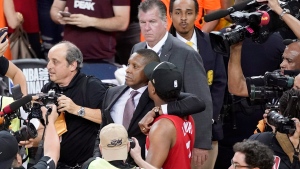 In a lawsuit filed Friday in a northern California district court, Alan Strickland alleges that he suffered “injury to his head, body, health, strength, nervous system and person, all of which caused and continue to cause great mental, physical, emotional and psychological pain and suffering.”

Strickland and his wife, Kelly Strickland, are seeking US$75,000 in general damages, as well as other compensation including punitive damages, lost wages, current and future medical expenses and legal costs.

The Raptors, team owner Maple Leaf Sports & Entertainment and the NBA were also named as defendants in the lawsuit. None of the allegations have been proven in court.

“We are disappointed but not at all surprised Mr. Strickland has elected to take this path,” an MLSE spokesperson told The Canadian Press. “His claims are baseless and entirely without merit. They should and will be viewed appropriately for what they are. The Toronto Raptors and Masai have jointly retained very able counsel who will be handling this matter on our behalf and consequently, we do not intend to make any further statement about it.”

The incident occurred June 13, after the Raptors won their first-ever title after taking Game 6 of the NBA finals.

Ujiri went onto the court to join his celebrating team, when Strickland stopped him because Ujiri didn't provide the proper on-court credential, leading to a shoving match that was partially captured on video.

Several bystanders intervened and Ujiri got onto the court without displaying any credentials.

The Alameda County district attorney's office announced in October, just before the start of the 2019-20 NBA season, that prosecutors would not press criminal charges against Ujiri.

Strickland, however, alleged at the time he suffered a concussion in the altercation. The lawsuit alleges that Ujiri acted “despicably, maliciously, fraudulently and oppressively with the wrongful intent of injuring (Strickland) for an improper and evil motive amounting to malice, and in conscious disregard of the plaintiff's rights.”

The lawsuit also claimed that Kelly Strickland has been deprived of companionship and care as a result of her husband's alleged injuries.

This report by The Canadian Press was first published Feb. 10, 2020.