Pascal Siakam makes his case as NBA's most improved player 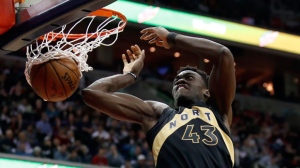 Pascal Siakam confidently launches shots he may not have dared attempt in previous seasons. He makes plays during times of the game when he would have been sitting on the bench.

The Toronto Raptors forward might be the leading candidate for the most improved player award and he'd like to win it. But he's already received recognition that means more to him.

Fellow players have noticed how much work he's put in and how much it has paid off this season. The acknowledgement from All-Stars such as Paul George and Bradley Beal shows that Siakam's giant leap has caught the attention of more than just the media panel that votes for the NBA awards.

"I just enjoy sometimes after the games, guys coming up to me and showing respect for me. That's the most important thing," Siakam said. "Like, I don't care about the rest. I think when your peers respect your game and respect the fact that they've seen you work, I think that's more important."

There's a lot for them to have noticed, including:

-- Siakam's scoring. It is up from 6.0 points per game through his first two seasons to 17.0 this season.

A player who was feared almost entirely for his work around the basket now has to be accounted for even when he's away from it. Brooklyn coach Kenny Atkinson called Siakam an X-factor who now demands a much bigger part of the scouting report.

"It changes because he's shooting the ball better," Atkinson said. "I think at first you could ignore his shot. Now it's like you've got to respect him from 3 and I know he's worked on it extremely hard, so that changes it.

"You could be in the paint, wait for his drives. You still have to respect (that) but I think he keeps getting better and better."

D'Angelo Russell, Atkinson's All-Star point guard, might be the other top candidate for most improved player after leading the Nets to a surprising playoff berth. Sacramento's De'Aaron Fox and Buddy Hield, Denver's Malik Beasley and the Clippers' Montrezl Harrell are some other players worthy of consideration.

But of them, Siakam has the biggest role on the team with the best chance to be playing into June.

The Raptors made major changes after they were swept out of the post-season by LeBron James and Cleveland in consecutive years. Dwane Casey was fired even after winning coach of the year honours, and All-Star DeMar DeRozan was dealt to San Antonio in the trade to bring in Kawhi Leonard.

The Raptors have come back with 57 wins and the second-best record in the East, with Siakam's growth central to their success. He can play in a traditional big lineup alongside Leonard and centre Marc Gasol, or in a smaller one if they go with Serge Ibaka in the middle.

The athleticism was always there for the 6-foot-9 forward. But now it's only part of the package for a player who made one 3-pointer his entire rookie season in 2016-17 and now averages one per game, the easiest place to notice his improvement.

"I don't know who else is even really up for it, who the voting's between, all that stuff. I know that if anybody's done more than this kid, has improved more, has impacted the team more and continued to improve from even geez, 20 games ago," Raptors coach Nick Nurse said. "He just keeps taking another step forward, there has been no steps back.

"He's certainly deserving. If there's somebody else who is deserving, then sometimes that's the way it works. But he's had an unbelievable season."

Soon it will be time for the Raptors to show how much they've improved along with him. They became post-season punching bags the last couple years who want to show they won't be pushed around any longer.

"We have a new group so it's going to be definitely tough and I think we're more focused on that," Siakam said. "Obviously we think about the playoffs, we're excited about it, can't wait for it. We just want to make sure we get the right chemistry and everything going so when that time comes, we'll be ready to perform."

He got into only two playoff games two years ago, when the native of Cameroon was still learning the game. It was only five years earlier when he had come through the Basketball Without Borders camp in Africa, then headed to Texas for prep school and onto New Mexico State before becoming a late first-round pick.

He's not sure if friends back home are aware of his success. But if he wins the Most Improved Player award, chances are they'll hear about it.

"I'm definitely not a personal-type guy where I care about personal accolades and stuff, but definitely a team-guy first," Siakam said. "Something like that, in terms of who I am and the person that I've become, and people that know my story and how I came up, that would mean a lot just because that's me. Like, that's literally who I am as a player and as a person."