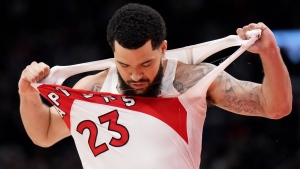 Toronto Raptors guard Fred VanVleet (23) rips of his jersey as he walks off the floor during first half NBA first round playoff action against the Philadelphia 76ers in Toronto, Saturday, April 23, 2022. The Toronto Raptors will not have all-star guard Fred VanVleet in the lineup for Monday’s playoff game with the Philadelphia 76ers. VanVleet has been ruled out of Game 5 with a strained left hip flexor. THE CANADIAN PRESS/Nathan Denette

VanVleet suffered the injury in the first half of Game 3, ripping his jersey in frustration as he left the court. He didn't play in the Raptors' 103-88 victory in Game 4 in Philadelphia.

VanVleet averaged 20.3 points, 6.7 assists, and 4.4 rebounds per game this season and was named an all-star for the first time, but the 28-year-old has also been battling a bruised knee that kept him out of 14 regular-season games since late January. The Raptors won nine of those.

VanVleet said he hopes to be healthy enough to play in the second round, should the Raptors win the seven-game series.

Game 7, if needed, would be Saturday in Philadelphia.