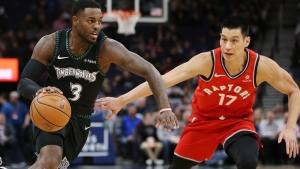 MINNEAPOLIS -- Kawhi Leonard scored 20 points and the Toronto Raptors closed their regular season with a 120-100 victory over the Minnesota Timberwolves on Tuesday night.

Fred VanVleet scored 16 points, and Chris Boucher had a career-high 15 points and 13 rebounds off the bench for the Raptors, who finished the regular season at 58-24.

Andrew Wiggins and Gorgui Dieng each scored 16 points for the Timberwolves, who played without All-Star centre Karl-Anthony Towns.

Boucher scored 11 points in 10 minutes in the second quarter. Boucher's previous career best was the nine points he scored Dec. 28 against the Orlando Magic.

The Timberwolves never got closer than 15 points in the second half, and the Raptors led by as many as 32 points in the final two periods.

Towns did not play because of knee soreness. Timberwolves coach Ryan Saunders said Towns would travel with the team for Wednesday's season finale in Denver and be a game-time decision.

The Raptors set a franchise record with their 26th road victory of the season.

The Raptors were in Minneapolis on Monday night, allowing coach Nick Nurse and his staff to attend Monday night's NCAA title game. Nurse played against Virginia coach Tony Bennett when Nurse was at Northern Iowa and Bennett was at Wisconsin-Green Bay. "I think I held him to 29 points one time," Nurse joked.

Timberwolves: At Denver Nuggets on Wednesday.