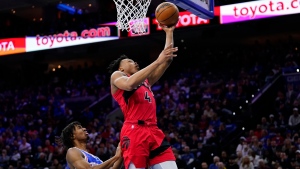 Toronto Raptors' Scottie Barnes, right, goes up for a shot past Philadelphia 76ers' Tyrese Maxey during the first half of Game 5 in an NBA basketball first-round playoff series, Monday, April 25, 2022, in Philadelphia. (AP Photo/Matt Slocum)

PHILADELPHIA - The Toronto Raptors faced elimination for the second time in three days - and came out victorious once again.

Pascal Siakam scored 23 points and 10 rebounds and the Raptors beat the 76ers 103-88 on Monday to cut Philadelphia's lead in their best-of-seven opening-round playoff series to 3-2.

Precious Achiuwa had 17 points, while OG Anunoby and Gary Trent Jr. finished with 16 apiece for the Raptors, who were missing injured all-star guard Fred VanVleet. Scottie Barnes, in his second game back after sitting two with a sprained ankle, had 12 points and eight rebounds.

The Raptors face elimination yet again in Game 6 in Toronto on Thursday.

Joel Embiid, who was playing with a torn ligament in his right thumb, had 20 points and 11 rebounds to lead the Sixers.

Two nights after their 110-102 win in Toronto to force a Game 5, the Raptors got off to a strong start, racing out to a nine-point lead in the first quarter and stretching it to 14 in the second. They led by double digits for most of the third and took a 75-66 advantage into the fourth.

Boos rained down from the crowd when Barnes chucked a cheeky no-look pass to Achiuwa for a dunk for a 13-point lead with 6:11 to play. James Harden's three-pointer sliced the difference to nine points with 6:11 to play, but after a couple of scoreless minutes by both teams, Anunoby drilled a three-pointer for 13 points of breathing room with 3:52 to play.

When Anunoby drove to the hoop for a dunk with 2:14 to play, thousands of Philly fans headed for the exits, as if there'd been an evacuation order. Raptors coach Nick Nurse emptied his bench with 1:19 to play.

Two nights earlier in Toronto, Siakam had poured in a playoff career high 34 points and the Raptors pulled away to beat Philly and stave off elimination.

No team in NBA history has come back to win a seven-game series after trailing 3-0. Nurse called it a “heckuva challenge” and said “somebody's gotta do it.” Thirteen teams have come back from 3-1 deficits, and Sixers coach Doc Rivers has been on the losing end of two of those. It would almost be fitting for the Raptors, who've endured plenty of upheaval in the past two seasons, including having to play out of Tampa, Fla., last season due to COVID-19 border restrictions.

VanVleet confirmed at Monday morning's shootaround he wouldn't play due to a strained left hip flexor suffered in the first half of Game 4. VanVleet, who's been battling a bruised knee all season, said his body has “tapped out.” He was unsure if he'd be healed sufficiently to play in Game 6.

The Raptors got off to a strong start, pestering the Sixers into 10 turnovers in the first quarter. Trent Jr. had nine points in the frame to lead the way, and his step back shot had the Raptors up by nine less than five minutes into the game. The Sixers pulled to within a point with a 10-2 run that included an unfortunate Achiuwa tip-in on Philly's net when he and Barnes both went up to grab a rebound. The Raptors led 29-27 to start the second.

Toronto opened the second with a 12-0 run that featured a behind the back dribble by Barnes, the Raptors' newly minted NBA rookie of the year, on the fast break. Siakam's finger roll had Toronto up by 14 points. The closest the Sixers got in the quarter was six points, and the Raptors headed into halftime up 54-41. The disgruntled Sixers crowd of 20,517 fans booed their team off the floor.

The Sixers won Games 1 and 2 by 35 points combined, then Embiid hit a clutch three-pointer with less than a second left in overtime in a Game 3 heartbreaker.

Game 7, if needed, would be back in Philadelphia on Saturday.

This report by The Canadian Press was first published April 25, 2022.

Toronto Raptors' Scottie Barnes, right, goes up for a shot past Philadelphia 76ers' Tyrese Maxey during the first half of Game 5 in an NBA basketball first-round playoff series, Monday, April 25, 2022, in Philadelphia. (AP Photo/Matt Slocum)