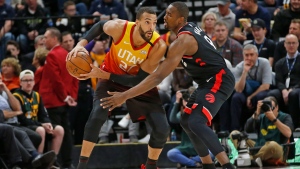 TORONTO -- Three days after the Toronto Raptors played in Utah, the players, coaches and travelling staff have gone into self-isolation amid the threat of COVID-19.

The Raptors' 14-day isolation comes after a Utah player, reportedly centre Rudy Gobert, tested positive for the virus that has the sports world screeching to a halt. The Raptors also underwent testing for the virus, and are awaiting the results.

"The safety of our players, staff, fans and the media who cover our team is paramount. While we are disappointed the NBA season has been suspended because of the COVID-19 global pandemic, we completely support the league's decision," the Raptors said in a statement Thursday.

The Raptors beat Utah 101-92 and as with any NBA game, the players were in close physical contact. OG Anunoby was in a late-game scuffle with Gobert, and the two players were ejected.

The Jazz announced the positive test moments before they were scheduled to tip off against the Thunder in Oklahoma City on Wednesday evening. The NBA announced soon after it had suspended the season. The G League followed suit later Wednesday.

"Our team doctors remain in communication with infection control specialists and public health authorities, and we will continue to abide by their advice," the Raptors said.

The team made two public appearances since returning from Utah on Tuesday morning -- the launch of coach Nick Nurse's foundation, and a Norman Powell bowling event.

The Raptors said that according to Toronto Public Health, being in close contact with someone who does not have COVID-19, but was exposed to someone with COVID-19, does not constitute a risk for getting COVID-19 and does not require public health follow up.

Team officials recommended people who attended either of the events should "continue to monitor their health, practise social distancing and hand washing, and contact a health professional should they develop symptoms."