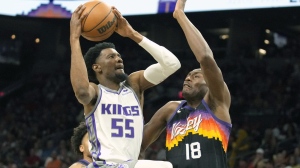 Through five NBA seasons, he is shooting 41.6 per cent from the floor and has recorded nine double-doubles.

The Raptors are now at the maximum 20 players allowed heading into training camp. They made room on the roster for a signing this week by waiving guard Svi Mykhailiuk on Monday.

This report by The Canadian Press was first published Aug. 31, 2022.