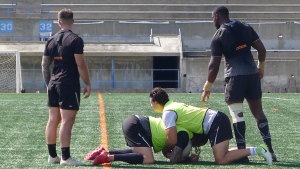 TORONTO - After breezing through the seven-month regular season, the Toronto Wolfpack get down to the business end of their schedule Sunday when they host Toulouse Olympique in a promotion playoff semifinal.

Toulouse (20-7-0) handed Toronto its lone loss of the regular season, a 46-16 setback in early March that saw the French side rally from a 10-point deficit at halftime by reeling off 40 unanswered points.

Toronto (26-1-0) has not lost since, winning its last 21 matches - including two rematches with Toulouse. The transatlantic rugby league team earned a first-round playoff bye by virtue of topping the second-tier Betfred Championship regular-season standings, finishing 12 points above runner-up Toulouse.

The French side thumped York City Knights 44-6 last weekend in the opening round of the five-team playoffs. Toulouse has won its last eight games and has not lost since July 6, when it was beaten 26-24 by Bradford.

“We're excited,” said Wolfpack captain Josh McCrone, a veteran of the NRL in his native Australia. “We always enjoy a contest. The nature of the beast in the Championship is not every week you get a contest, but we know with Toulouse every time we play against them it's a great contest of footie.”

Wolfpack coach Brian McDermott sees the French visitors as a free-flowing side that can cause problems.

“They're a real big threat, Toulouse,” he said. “I've got a lot of respect for what they've done ... They're genuine viable Super League contenders.”

Sunday's winner advances to the Oct. 5 Grand Final with a berth in the top-tier Super League on the line.

York, which gets another chance despite last week's loss, hosts Featherstone Rovers in the other semifinal Saturday. The winner will face the Toronto-Toulouse loser in a preliminary final to determine the other team in the Grand Final.

Toronto, in its third season, knows what it has to do on the field to secure promotion. But there be more to do off the field, according to Super League chief executive Robert Elstone.

“If Toronto win the right to be promoted, then they have to meet minimum standards,” Elstone said this week, according to British reports. “We are seeking a number of assurances from the RFL (Rugby Football League) and if we get those, and Toronto win that (Oct. 5) game, they are in - but it's important we get assurances well before promotion is secured on the pitch.

“What we can't do is make the decision after promotion on the pitch; it has to be done in advance of that. If they are in, they won't be taking a central distribution and the pot will be shared among the other eleven clubs.”

Brian Noble, Toronto's director of rugby, downplayed Elstone's comments, saying he was “really confident” the Wolfpack are ticking off all the required boxes.

Toulouse, meanwhile, is hoping to join France's Catalan Dragons in the Super League.

On the field, McDermott likes where his team is at. But the former England international knows that Toulouse, at its best, is hard to handle given its ability to keep attacks going by offloading the ball in the tackle.

“When they get an offload, they play that offload to its nth degree,” he said. “They never say die with it. And it will involve a reverse-flick pass, a round-the-corner pass, a kick off the outside of the boot, a 30-, 40-yard cutout pass to anybody - to a patch of grass they don't even know is there. But it usually comes off for them.”

“They play that style better than anybody I've seen,” he added. “And if we're facing that version, we've got to be really good.”

Both teams sport stingy defences. Toronto gave up just 13.2 points a game, compared to 16.5 for Toulouse.

The March loss to Toulouse was Toronto's first setback since the 4-2 defeat to London Broncos last October in the Million Pound Game that snuffed out its promotion hopes. That marked the Wolfpack's last home defeat.

Toronto holds a 5-1-0 edge over Toulouse in the overall series.

A pair of Wolfpack players can reach milestones Sunday. Halfback Joe Mellor is one appearance from 200 for his career while winger Matty Russell is one away from 150.

Russell is also one try from setting a Wolfpack record in a season. He is currently tied with fellow winger Liam Kay with 27.