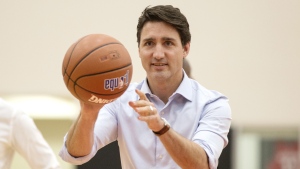 SAULT STE MARIE, Ont. - Even the prime minister is excited about the Toronto Raptors ahead of the biggest game in the franchise's history.

Justin Trudeau says his son is a massive Raptors fan who has been staying up later than usual to watch the team play in the NBA Eastern Conference final.

Trudeau, who was speaking to reporters in Sault Ste. Marie, Ont., says his household is "extremely excited" about the basketball team.

The Raptors have a 3-2 lead in games against the Milwaukee Bucks and are set to play Game 6 in Toronto tomorrow night.

A win means Toronto would make its first ever NBA finals appearance.

The Raptors' playoff run has captured fans' attention, particularly after star Kawhi Leonard scored a buzzer-beater that vaulted the team into the Eastern Conference finals.