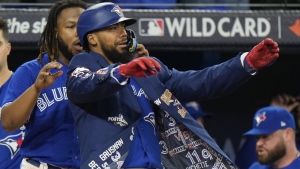 Both are two-time winners of the award given to the best offensive player at each position in both the American and National League.

Hernandez is looking for his third consecutive Silver Slugger, having earned it in 2020 and 2021.

Guerrero won the award in 2021, while the other three Toronto players have yet to earn the honour.

This report by The Canadian Press was first published Oct. 27, 2022.