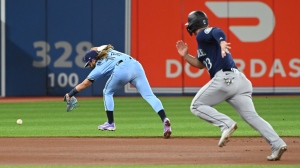 TORONTO - Ty France's two-run homer helped the Seattle Mariners to a 5-1 win over the Toronto Blue Jays on Wednesday.

Marco Gonzales (2-4) gave up only one run on five hits and three walks, striking out two over six innings. Andres Munoz, Paul Sewald and Diego Castillo shut the door the rest of the way.

Vladimir Guererro Jr. and Santiago Espinal both extended their career-best hit streaks for the Blue Jays (20-18).

Guerrero has had a hit in 15-straight games and Espinal's streak is now 12 games long.

Kevin Gausman (3-3) limited Seattle to two runs despite giving up seven hits and a walk over five innings, striking out three.

Espinal continued his hit streak in the third inning with a single to left field. He was forced out after George Springer hit into a fielder's choice, but Toronto scratched out a run as Bo Bichette and Guerrero followed up Springer's hit with consecutive walks to force Matt Chapman across home plate.

Raleigh led off the fifth inning with a line drive just over the left-field wall at Rogers Centre to restore Seattle's one-run lead. The 391-foot shot was his third of the season.

France's sixth home run of the season came in the top of the seventh. Richards had struck out two to start the inning and then Frazier singled, setting up France's 416-foot bomb to left field for a 4-1 Mariner's lead.

Guererro's single to right field off of Sewald in the eighth inning extended his hit streak to 15, a new career high. His previous best was a 14-game streak last season from Aug. 23 to Sept. 6.

Toro added to Seattle's lead in the ninth, sending a 2-2 pitch from Stripling over the right-field fence. It was the Canadian's fifth home run of the season.

TIP O'NEILL AWARD - Vladimir Guerrero Jr., who was born in Montreal while his father played for the Expos, was received the 2021 Tip O'Neill Award in a pre-game ceremony. The award is given to the best Canadian baseball player by the Canadian Baseball Hall of Fame. Longtime Blue Jays beat reporter John Lott received the 2021 Jack Graney Award for a lifetime of contributions to baseball in Canada.

ROMANO SICK - Toronto general manager Ross Atkins told reporters on Wednesday afternoon that closer Jordan Romano was recovering from a gastrointestinal infection. Romano, from Markham, Ont., had been listed as day-to-day with a non-COVID illness since Monday.

NEXT UP - The Blue Jays have Thursday off. Hyun Jin Ryu is expected to get his second start of the season on Friday as Toronto hosts the Cincinnati Reds in the first game of a three-game series. Ryu hasn't earned a decision in his three starts this season and has a 9.00 earned-run average. Luis Castillo (0-1) is scheduled to take the mound for the Reds.