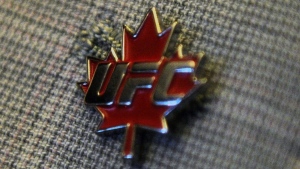 A pin with the Ultimate Fighting Championship logo and a maple leaf is displayed on Parliament Hill in Ottawa on Thursday, Sept. 29, 2011. THE CANADIAN PRESS/Sean Kilpatrick

Jourdain (13-5-1) finished with a flourish in the third round and connected with more significant strikes throughout (113-42 according to UFC Stats). But Burgos (15-3-0) took him down twice, attempted three submissions and had more than six minutes control time.

All three judges gave Jourdain the third round. Two of the judges awarded Burgos the first two rounds. The third judge gave the first and third to Jourdain but scored the second round 10-8 for Burgos, tying his scorecard at 28-28.

After the fight, Burgos said he was confident he had done enough to get the decision.

"For sure. I thought I had the first two rounds," said Burgos, who neverthless was not happy with his performance.

Burgos, a native of Monroe, N.Y., ranked 14th among 145-pound contenders, had the crowd behind him at the new USB Arena on Long Island.

At five foot 11, Burgos had a two-inch height and 6.5-inch reach advantage. But while Burgos was bigger, the 26-year-old from Beloeil, Que., has the speed advantage

The 31-year-old Burgos came out pushing the pace, stalking Jourdain around the cage. They clinched at the fence and Burgos took Jourdain down. When they got back up, Burgos was clamped to Jourdain's back with a body triangle.

They went back down with Burgos applying a choke. Somehow Jourdain hung on. And the Canadian showed sportsmanship midway through the round when he stepped away, after Burgos' mouthpiece fell out, to let him put it back in.  Jourdain connected with some punches and knees as they clashed at the fence.

Burgos controlled the second round, latching onto the standing Jourdain's back again with a body triangle. They went to the ground with Jourdain, a black belt in Brazilian jiu-jitsu, looking to shake him off. Burgos went for a choke but could not get his arm under Jourdain's chin as the Quebecer fought him off.

The crowd started chanting "U-S-A" in the third round with Jourdain firing quick-fire jabs and Burgos hitting back with leg kicks. There was less movement from Jourdain as the two traded blows.

Jourdain upped the pace and hurt Burgos with a string of uppercuts and then took Burgos' neck, firing knees as he held onto his opponent. The Canadian pummelled Burgos at the fence and then chased him across the cage.

Burgos slowed the barrage when he grabbed hold of Jourdain as the Canadian tried a flying knee and the bout ended with the two exchanging blows.

The loss snapped Jourdain's two-fight win streak and dropped his record in the UFC to 4-4-1. Burgos upped his UFC record to 8-3-0 with his second straight victory.