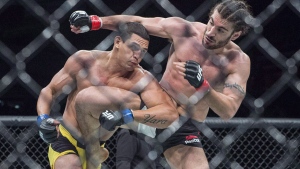 “He's a pressure monster. He wants to go forward,” said Theodorou (14-1-0). “He's a Ray Sefo (-trained) kickboxer. He's going to come at me with the basics and the basics do work.”

But not for Tavares, it seems.

“I'm going to show him the difference between chess and checkers,” said Theodorou, never short of a quip.

Lightweight contender Michael (The Menace) Johnson welcomes unbeaten Justin (The Highlight) Gaethje (pronounced gay-gee) to the UFC in the main event at the T-Mobile Arena. Johnson (18-11-0) is ranked No. 5 among 155-pound contenders while Gaethje (17-0-0) is a former World Series of Fighting lightweight champion.

While Tavares has lost three of his last five fights, Theodorou notes the defeats have come against quality opposition in the form of current No. 1 middleweight contender Yoel (Soldier of God) Romero, No. 3 Robert (The Reaper) Whittaker and No. 14 Tim (The Barbarian) Boetsch.

Statistically the two fighters are similar.

Theodorou can also grind fights out, stacking opponents against the fence.

Theodorou has had his arm raised in five of six UFC fights and has won his last two since making Montreal's Tristar Gym his training base following a loss to Thiago Santos in December 2015. He has since beaten Sam Alvey and Cezar Ferreira.

He sees himself as the fresher fighter than the 29-year-old Tavares.

“I think there's less mileage on me,” said Theodorou, winner of “The Ultimate Fighter Nations” in 2014. “He's a great fighter who's going to try to knock my block off and try and outstrike me. But I think that in many ways there's more of me to give in this fight.”

Theodorou, a smart operator inside and outside the cage, has already turned his wavy locks into becoming the “North American brand ambassador” for Pert Plus shampoo and conditioner. He's hoping to get the rest of the world involved on that sponsorship.

“I'm advertising the brand that is myself,” said the 29-year-old from Toronto, who bills himself as having “the best hair in combat sports.”

Theodorou says he is also working on a TV show and a couple of movies.

“Hard work gets you more hard work,” he said happily.