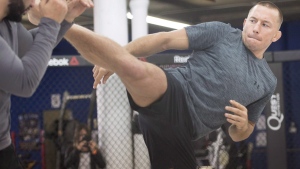 Georges St-Pierre, spars with his head trainer Firas Zahabi during a workout Wednesday, October 25, 2017 in Montreal. THE CANADIAN PRESS/Ryan Remiorz

Georges St-Pierre, a two-division UFC champion who put mixed martial arts on the map in Canada, is retiring.

The UFC has scheduled a “special press conference” with St-Pierre for Thursday at Montreal's Bell Centre. A source confirmed to The Canadian Press that the fighter is retiring.

The 37-year-old from St-Isidore, Que., last fought in November 2017 when he dethroned middleweight champion Michael (The Count) Bisping. He gave up the 185-pound crown a month later, citing health issues (ulcerative colitis)

The Bisping fight was St-Pierre's first since stepping away from the sport four years earlier after a memorable run as welterweight champion.

St-Pierre, who leaves with a 26-2 record, defended his 170-pound title nine times.