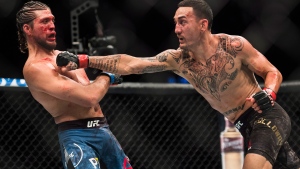 The fight was called off by the doctor after four rounds. Ortega's left eye was virtually closed, his face a bloody mask. It's a testament to Ortega's toughness that he made it that far.

“Kudos to him,” Holloway said of Ortega. “On to the next (opponent).”

The champion's striking skills were too much for Ortega. The challenger, who rallied in the third, was unable to take Holloway down or use his vaunted jiu-jitsu.

“That fifth round should never have happened and I'm glad it didn't,” he said. “The fight needed to be stopped. For us all of in here that have been in the fight game for a long time, that's what you call too tough for your own good.

White said both fighters were getting checked out after the fight. “I'm going to make sure they get everything twice,” he added.

Holloway improved to 20-3-0, adding to his credentials as possibly the greatest featherweight ever, while Ortega slipped to 14-1-0 with one no contest.

It could be Holloway's last fight at 145 pounds. White wants him to move up to lightweight (155) to avoid the gruelling weight cut.

Valentina (Bullet) Shevchenko, a native of Kyrgyzstan fighting out of Peru, overpowered a game, but outmatched Joanna Jedrzejczyk of Poland for the vacant women's flyweight title in the co-main event at soldout Scotiabank Arena crowd of 19,039.

“I have been waiting so long for this moment,” said the 30-year-old Shevchenko.

Ortega, the No. 1 contender and an accomplished Brazilian jiu-jitsu black belt, entered the arena to the sounds of DMX's “X Gon' Give It To Ya.” The Blessed Express came next as Hawaii's Holloway walked out to “Game Over” by Lil' Flip and then “Hawaiian Kickboxer” by Moke Boy.

The crowd started chanting “Holloway, Holloway” as the two circled each other. Ortega scored with counter punches as the champion came forward and connected with an elbow. A relaxed Holloway began to find his striking distance and stuffed a takedown as the round ended.

Ortega's nose began to bleed profusely in the second as Holloway fired punches. Another takedown was rebuffed and Holloway taunted the challenger. The two exchanged words after a dominant Holloway round.

Ortega came back in the third, connected with punches and almost got Holloway to the ground. The crowd started chanting T-City. Holloway fought back with punishing blows as Ortega's face continued to leak blood.

When Ortega connected, Holloway nodded as if to give him props. Ortgea showed he can take a punch.

Holloway danced in the fourth and then hammered Ortega at the fence. He took him down later in the round as the punishment continued.

Holloway, 27, had won his last 12 fights since an August 2013 loss via decision to Conor (The Notorious) McGregor.

It was the champion's first fight since Dec. 2, 2017, due to a variety of health issues.

The two 145-pounders were originally slated to meet at UFC 226 in July, but Holloway was forced to withdraw at the last minute due to what was thought to be “concussion-like symptoms.”

An ankle injury had forced Holloway out of a March bout against former lightweight champion Frankie (The Answer) Edgar at UFC 222. Ortega filled in for Holloway, winning by spectacular first-round TKO.

Holloway also missed out on a short-notice fight with current lightweight champion Khabib Nurmagomedov at UFC 223 in April (after Tony Ferguson withdrew with a knee injury), pulling out during his weight cut.

The lone blemish on the 27-year-old Ortega's record was a 2014 win over Mike de la Torre that was changed to a no contest after a positive test for the steroid drostanolone. The California native was suspended nine months and fined US$2,500.

Ortega apologized for the failed test, saying he took the drug to help with his weight cut.

Jedrzejczyk (15-3-0) and Shevchenko (16-3-0) have campaigned in different weight classes. Jedrzejczyk held the strawweight title at 115 pounds until September 2017 when she was beaten by Rose (Thug) Namajunas in Edmonton. Shevchenko lost a split decision to Brazil's Amanda (the Lioness) Nunes in November 2017 for the bantamweight crown at 135 pounds.

Saturday night they met in the middle at 125 pounds.

Shevchenko looked bigger and bulkier, taking Jedrzejczyk down a minute into the fight. Jedrzejczyk got back to her feet but had trouble gauging her striking distance early.

While she tried to find it, Shevchenko was content to counter. Shevchenko bodied Jedrzejczyk to the ground in the second, got side control and did damage as the round ended.

Shevchenko came on the third, bloodying Jedrzejczyk's nose. Jedrzejczyk was taken down again in the fourth.

The main card opened with a bang as Brazil's Thiago (The Sledgehammer) Santos, a former ranked middleweight, stopped England's Jimi (Poster Boy) Manuwa, ranked No. 9 among light-heavyweights, in the second round of a wild 205-pound slugfest that had the crowd roaring.

The first round was five minutes of heavy-hitting mayhem with both fighters in and out of trouble. Santos (20-6-0) caught Manuwa at the fence early in the second round and kept pounding until Manuwa (17-4-0) toppled and the referee stepped in 41 seconds into the round.

Santos, who has a sledgehammer tattooed on his chest, is now 12-5 in the UFC with 10 knockouts. He collected a $50,000 performance bonus.

“I feel great since moving up to 205,” he said. “This is my division and I will be the champion.”

“I was pretty surprised when they announced a split decision,” said Dawodu, echoing the sentiments of many observers.

“I got the win though and felt dominant doing it, so that's all I can ask for,” he added.

The strategic fight, fought almost entirely on the feet, had the misfortune of coming after the Santos-Manuwa brawl - a tough act to follow. But Dawodu improved to 2-1 in the UFC with a controlled performance that bloodied Bochniak.

Canadians went 2-3 on the undercard with Elias (The Spartan) Theodorou and Brad (Superman) Katona both winning decisions. Kyle (The Monster) Nelson, Chad (The Disciple) Laprise and Olivier Aubin-Mercier lost.

Iceland's Gunnar (Gunni) Nelson, ranked No. 14 among welterweights, showed off his elite grappling skills in stopping No. 13 Alex (Cowboy) Oliveira of Brazil.

Wearing his trademark cowboy hat, the happy-go-lucky Oliveira (19-5-1 with two no contests) high-fived fans and danced his way to the cage. His mood - and face - changed in the second round as Nelson (17-3-1) took him down, got mount, carved him open with elbows and then locked on a rear-naked choke to end it at 4:17.

It marked the UFC's first visit to Toronto since UFC 206 in December 2016 when Holloway beat Anthony (Showtime) Pettis for the UFC interim featherweight title. He then knocked out Jose Aldo to unify the title.