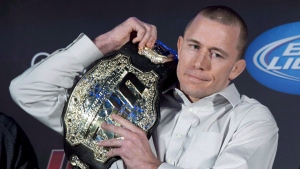 Welterweight UFC champion Georges St-Pierre put his belt on his shoulder during a news conference in Montreal on January 23, 2013. THE CANADIAN PRESS/Paul Chiasson

TORONTO - The UFC has decided against matching Georges St-Pierre with current title-holder Tyron (The Chosen One) Woodley, opting instead to return to its original plan and have the Canadian star make his comeback against middleweight champion Michael Bisping.

White said there was no date set yet.

The 36-year-old St-Pierre, who has not fought since November 2013, reacted to the news with a thumbs-up and happy face emoji in a text to The Canadian Press.

He also posted a picture of him having breakfast with coach Jorge Blanco, saying he had “started planning how I'm gonna beat Bisping!”

Bisping responded via social media: “Looks like George (sic) had a good bowlful of make believe for breakfast.”

The change must have come as news to Woodley who, in his post-fight interview in the cage Saturday, cited St-Pierre as his next assignment on Nov. 4 in New York

White was unhappy at the lack of spectacle in the Woodley-Maia fight, which set a record for the least amount of punches thrown in a five-round UFC title fight.

Woodley connected on just 57 of 153 attempted significant strikes, while stuffing all 21 takedown attempts from Maia. The Brazilian was good on only 28 of 89 significant strike attempts, according to FightMetric.

Woodley (18-3-1) was unapologetic after the fight, calling it “a chess match and I won it convincingly.”

Bisping is the high-profile opponent St-Pierre wanted in ending his hiatus in February when he signed a new contract with the UFC. But White pulled it from the table after the Montreal star said he wasn't ready to fight until November because of an eye injury.

The 38-year-old Bisping, who is returning from an injured knee, was slated to meet interim champion Robert Whittaker next.

Bisping (31-7-0) is a brash Brit who has elevated his game in recent years. He can talk a good fight and fight one.

St. Pierre (25-2-0) left the sport on a 12-fight win streak, saying he needed the break because his life had become “completely insane” and a “freaking zoo.”

Facing Bisping means moving up a weight class, from 170 to 185 pounds.