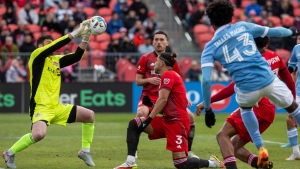 TORONTO - With 19 players from last year's roster moving on, Toronto FC had a lot of vacancies this season. Under new coach Bob Bradley, Canadian youth is getting its chance.

On Saturday, it was time for Kosi Thompson's close-up. The 19-year-old from Toronto, who had seen just 14 minutes of action off the bench, started at wingback in place of the injured Jahkeele Marshall-Rutty, a 17-year-old from nearby Brampton.

Thompson, after taking some early advice from Bradley to step up, looked at home and played his part in Toronto's opening goal of a 2-1 win over defending champion New York City FC.

Jesus Jimenez scored and NYCFC conceded an own goal to give Toronto a 2-0 lead at halftime.

New York (1-3-1) had more of the ball (57.4 per cent possession) but failed to take advantage until Brazilian substitute Heber scored on a stylish header in the 92nd minute. For Toronto (2-2-1), it was a second straight win.

Thompson was one of five Canadian starters for TFC. Six other homegrown products were on the bench with three seeing action.

The Canadian contingent who made it on the field included 19-year-old Jayden Nelson, 21-year-olds Luca Petrasso, Noble Okello and Jordan Perruzza and 22-year-old Jacob Shaffelburg.

While Toronto remains a work in progress under Bradley - with Italian star Lorenzo Insigne not arriving until July - the veteran coach is liking what he sees.

“I see the confidence of the team. I see good performances by key players. I see young guys improving,” said Bradley. “So those are all things that are very positive.”

It was the first game at BMO Field since Canada clinched World Cup qualification a week earlier in a 4-0 win over Jamaica. It was warmer - five degrees Celsius - at kickoff and quieter than the sellout crowd of 29,122 for the Canada contest.

“Let them hear you in Qatar,” the PA announcer said in urging the announced crowd of 21,802 to sing “O Canada” prior to kickoff.

Toronto grew into the game and went ahead in the 31st minute when Jonathan Osorio's through ball split the visitors' defence en route to an unmarked Jimenez, who beat Sean Johnson to the corner for his third goal of the season.

Osorio, making his 297th appearance in all competitions in Toronto colours, was flying in the first half. And he was rewarded with an ovation when he exited in the 60th minute.

The 29-year-old midfielder completed 98 per cent of his passes on the day.

Toronto doubled its lead in the 43rd when Thiago Martins headed the ball into his own goal off a dangerous Pozuelo free kick. The Brazilian designated player was under pressure from Toronto's Lukas MacNaughton who had risen high to meet the ball.

TFC bent but didn't break in the second half as the visitors pressed. Alex Bono made an acrobatic save off Keaton Parks in the 68th minute to maintain the Toronto advantage.

NYCFC's checkered league start has been, in part, due to a hectic early-season schedule because of the Scotiabank CONCACAF Champions League. After Toronto, the New Yorkers head to Seattle for Wednesday's first leg of their Champions League semifinal with the Sounders.

Toronto dodged a bullet when referee Drew Fischer reversed his eighth-minute penalty decision after Talles Magno went down in the penalty box. Fischer initially thought Thompson had clipped the Brazilian's leg but video review showed Magno had got his own feet tangled.

Thompson's yellow card was also withdrawn. Opinions were split on whether the chasing Thompson had accidentally clipped the NYCFC player with his knee, causing him to lose balance.

Thompson said Magno “sort of slipped over himself.”

“I am starting to get used to it now because it happens five or six times every year. It's like if a player or a coach keeps making mistakes, in the end, you just give up. It's irritating for the boys because we started the game really well.”

After the game, Bradley said Marshall-Rutty will likely be out eight to 10 weeks after having a fragment removed from his knee on Friday.

Former Brazilian star Ronaldinho was in attendance at the game.

This report by The Canadian Press was first published April 2, 2022