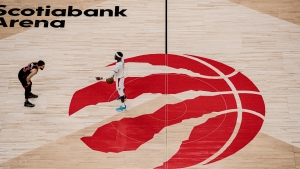 TORONTO - Fred VanVleet had 31 points and nine assists in his first game back from COVID-19 protocols to lift the Toronto Raptors to a 116-108 victory over the Los Angeles Clippers on Friday.

OG Anunoby added 26 points in a virtually spectator-free Scotiabank Arena due to Ontario's tightened COVID-19 restrictions. Pascal Siakam had 25 points and tied a career high with 19 rebounds for Toronto (15-17), on what normally would have been a festive New Year's Eve affair.

Chris Boucher and Svi Mykhailiuk are the only Raptors who've avoided COVID protocols, and with the team now finally back at almost full strength Friday, the Raptors were optimistic.

They raced out to a 15-point lead, but a couple of sloppy quarters on the defensive end and poor three-point shooting saw them trailing 87-82 to start the fourth.

They regained the lead early in the quarter with a 12-4 run punctuated by a dunk and three-pointer by Anunoby.

Siakam's dunk with 1:34 to play had Toronto up 109-105, Terance Mann connected from long distance to make it a one-point game, then VanVleet connected on back-to-back three-pointers to put the game out of reach with 24 seconds left.

With no fans in attendance except for a few dozen family members, the game was reminiscent of the 2020 NBA bubble in Florida. The Ontario government announced Thursday that it was slashing crowd capacity from the 50 per cent that went into effect two games earlier, to just 1,000 people due to the skyrocketing COVID-19 cases in the province.

The gaping 19,800-seat arena made for an almost fitting backdrop to send off 2021 -- another bizarre year in the COVID-19 era of sports.

Asked if playing in front of no fans would be weird, Brian Shaw -- who filled in for Lue -- said “I don't think anything is weird anymore.”

The national anthems were broadcast via video, and canned applause played throughout the game. There was a video tribute for former Raptor Serge Ibaka that was met with silence. Glittery “Happy New Year!” messages flashed on the Jumbotron. The fourth quarter began with a prompt for fans to “MAKE SOME NOISE!”

The Raptors at least are accustomed to curve balls. Border restrictions and capacity limits in Toronto last season forced them to call Tampa, Fla., home, where they played many games in front of a smattering of fans.

“We've had to get ready to play in a lot of different venues,” Raptors coach Nick Nurse said before the game. “The main thing to keep in mind or in the forefront is that we're getting to go out there and play.

“I mean, listen, you think about it ... get disappointed when you hear the news come out, probably all wish it wasn't this way but it is and you've just got to get on with it.”

The Raptors got off to a great start but the Clippers went on a 16-4 run that straddled the first and second quarters, closing to within 32-29 to end the first, and taking the lead early in the second.

Poor defence and terrible three-point shooting saw Toronto outscored 33-24 in the second quarter and L.A. went into halftime up 62-56.

VanVleet had 11 points in the third, including a running layup that tied the game with 3:41 left in the quarter.

The Clippers have four players sidelined because of protocols, including centre Ivica Zubac, who entered protocols on Thursday.

The NBA had about 120 players in health and safety protocols on Friday.

Some 97 per cent of NBA players are double vaccinated and at least two-thirds of players have received boosters.

The Raptors host New York on Sunday and San Antonio on Tuesday to cap their four-game homestand.

This report by The Canadian Press was first published Dec. 31, 2021.