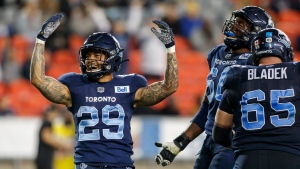 Toronto Argonauts running back D.J. Foster (29) celebrates after scoring a touchdown during first half CFL football action against the Montreal Alouettes in Toronto, Friday, Sept. 24, 2021. THE CANADIAN PRESS/Cole Burston

Toronto (4-3) improved to 3-0 at BMO Field despite being without starter Nick Arbuckle (hamstring) and Canadian linebackers Henoc Muamba (hamstring) and Cam Jordan (ankle). And before the opening kickoff, the Argos announced starting receiver Eric Rogers wasn't playing, replaced by Damion Jeanpiere, who came off the practice roster.

Vernon Adams Jr.'s 27-yard touchdown pass to Jake Weineke at 14:05 to cut Toronto's lead to 30-27. But the Argos recovered the onside kick attempt with 53 seconds remaining.

The Alouettes got their final possession at their 12-yard line with 11 seconds remaining but there'd be no miracle comeback.

Montreal's William Stanback ran for 133 yards and a TD on 19 carries. Adams Jr. finished 30-of-39 passing for 382 yards and two TDs with two interceptions.

Friday's contest began an important stretch for both teams. It was the first of five straight games versus East Division opponents for Montreal while Toronto will play another contests against conference rivals.

Montreal opened the second half with a smart eight-play, 65-yard march. But it ended with Crezdon Butler recovering B.J. Cunningham's fumble at Toronto's 10-yard line.

However, Stanback's three-yard TD run at 12:36 of the third pulled Montreal to within 21-17. Toronto then countered with Bede's 29-yard field goal to open the fourth for a 24-17 advantage.

Bethel-Thompson's 45-yard touchdown pass to Worthy with nine seconds to play staked the Argos to a 21-10 half-time lead as they ended the quarter by scoring 14 points within 42 seconds. Foster put Toronto ahead 14-10 with a three-yard run at 14:09.

Worthy's touchdown came just two plays after Chris Edwards intercepted Adams Jr. and gave Toronto possession at centre field. Montreal trailed at the half despite having rushed for 96 yards and holding the ball for over 18 minutes.

What's more, Montreal surrendered two first-half sacks. And Bethel-Thompson was a stellar 11-of-13 passing for 173 yards and the two TDs.

Montreal took a 10-7 lead on Cote's 17-yard field goal at 8:27. It was set up by Rashaun Simonise's recovery of Worthy's kickoff return fumble at the Toronto 42-yard line.

The Alouettes were kicking off after Adams Jr.'s seven-yard touchdown pass to Lewis at 2:57 made it 7-7.

Toronto opened the scoring with Bethel-Thompson's 15-yard TD strike to Gittens Jr. at 11:39 of the first. It capped a 10-play, 94-yard drive that was aided by a 34-yard pass interference call on Montreal's Greg Reid.

This report by The Canadian Press was first published Sept. 24, 2021.