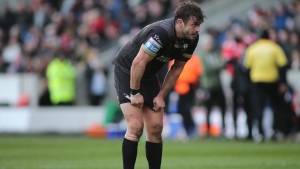 Wolfpack forward Jon Wilkin looks on during the Wolfpack's 24-16 loss to the Salford Red Devils on Feb. 8 in Super League play in Salford, England, on February 8, 2020. THE CANADIAN PRESS/HO - Touchline Pics, Stephen Gaunt

A knee problem forced Jon Wilkin to pull out of the warmup ahead of the Toronto Wolfpack's Feb. 13 game against Wigan Warriors.

The 36-year-old forward had been carrying an injury for a while, leaving his right knee swollen.

Needing the 17th operation of his distinguished rugby league career, Wilkin tried to get it done the next week. But his surgeon's schedule was full. As a result, Wilkin was expected to be a spectator for the Wolfpack's next match Feb. 21 at Warrington.

At least that's what Toronto coach Brian McDermott thought. Until he saw Wilkin working out on the field two hours from kickoff at Halliwell Jones Stadium.

"Which I thought was crazy," McDermott said. "Then I got a text and a phone call from my staff saying Jon Wilkin's going to put his hand up to play. And he played."

Playing on a bum wheel -- "I've got no cartilage in my right knee really," he explains -- Wilkin led all players with 39 tackles in the Wolfpack's 32-22 loss.

"It's just a demonstration of his commitment to us, for sure," said McDermott.

There was more swelling this week -- and another trip to the surgeon. Surgery has been put off a few weeks and, knee permitting, Wilkin hopes to take on St. Helens, the defending Super League champion and his former club, on Saturday.

Saturday's contest, ostensibly a Toronto home game, was originally scheduled to be played at Saracens' Allianz Park in north London due to the Canadian winter. When that arrangement fell through, it was switched to Halliwell Jones Stadium.

A former England and Great Britain international, he has won Super League, World Club Challenge and Challenge Cup titles. Off the field, he doubles as a TV pundit and is a restaurateur (he owns two called Pot Kettle Black in Manchester plus an artisan bakery and is about to open a third eatery in the city centre and a fourth at Manchester airport).

While a forward, Wilkin serves as an additional playmaker for Toronto, helping pull the strings of the offence. His knee issue isn't helping, however.

"He plays a pivotal role for us," said McDermott. "Quite often those pivotal players end up passing the ball and get some sort of shoulder contact or heavy contact just after they release the ball. Certainly the legs that you're running on need to be stable to try and ride a bit of that contact.

"So it's even more incredible that he had a pretty decent game with us as well (against Warrington). He didn't just limp his way through."

Rugby league has taken its toll. Asked about his surgeries, Wilkin lists off his knees (he reckons at least five operations on his right knee alone), disc, shoulder, hernia, cheekbone, nose, elbow and hands.

He has pins in both his hands and a titanium plate in his neck.

"Falling to bits is more accurate," he said with a chuckle.

"I'm destined to need a knee replacement at some stage in the future," he added.

He hopes the layoff after having his knee cleaned out will be limited to three to four weeks. But he knows from experience that the surgeon may find something else in checking out the joint.

Wilkin hadn't really planned to play at Wigan. But for some reason, he picked up his equipment bag as he left for the game. His wife, former Olympic swimmer Francesca Wilkin (nee Halsall), noticed and asked why.

Traffic was light en route to the game so Wilkin arrived early.

"I just sat in the changing room and thought 'Well I should at least try and get on the field."'

So he went out and did a solo fitness test.

"I felt OK. I'm not going to lie, I didn't feel great but I felt OK. I felt as though I could help the boys out if I could get through another game before the surgery."

He ended up playing the full 80 minutes.

His wife, unaware of developments, was in a friend's box at the stadium telling people her husband wasn't playing given he had been struggling to get up and down the stairs at home because of his knee.

"About 20 minutes into the game, I scored," Wilkin said with a laugh. "That was the first time she realized I was playing.

"I don't know what that says about how well I played or how much she pays attention. I think it's a combination of the two."