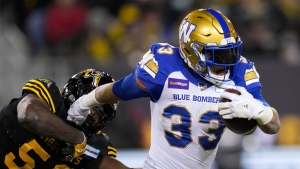 The all-time leading Canadian rusher in CFL history is set to begin his 12th season, but first with the Toronto Argonauts. Harris, 35, signed with the Double Blue as a free agent in February after being unable to agree on an extension with his hometown Winnipeg Blue Bombers, the team he helped win consecutive Grey Cup titles in 2019 and '21.

Harris was openly disappointed about his split from Winnipeg, saying he felt unwanted by the club. But the five-foot-11, 216-pound Harris says he's moved on and his focus this season is the same as it has been throughout his CFL tenure: continually having to prove himself as a Canadian running back.

"As soon as I passed the Ontario border when I was driving over here, I looked at Manitoba in the rear-view mirror," Harris said. "I was just excited to get here and meet my new teammates and coaches.

"It's been a great transition . . . everything is coming together now."

It was certainly a stellar five-year run for Harris in Winnipeg.

The CFL didn't play in 2020 due to the COVID-19 pandemic and returned last year with a shortened 14-game campaign. Harris was limited to seven contests, rushing for 623 yards (5.4-yard average) and three TDs.

But Harris ran for 136 yards and a TD in Winnipeg's 21-17 West Division final win over Saskatchewan before adding 80 yards on 18 carries (4.4-yard average) in the Bombers' 33-25 overtime Grey Cup victory over Hamilton at Tim Hortons Field.

Toronto was careful with Harris during training camp as he didn't play in either of its two exhibition games. Harris begins the '22 season needing just 339 yards to reach the 10,000-yard career plateau and 625 yards to move past former Bomber Charles Roberts (10,285 yards) into fifth all-time.

"Andrew understands pass protections, he helps out the offensive line. . . he's great out of the backfield and has that second-level burst still," Toronto head coach Ryan Dinwiddie said. "When we get through the first level we're going to have some chunk runs and that's something we lacked last year.

"He's one of those guys who brings that winning pedigree. It's something you can't teach and he has that."

Harris joins a Toronto team that finished atop the East Division last year with a 9-5 record before losing to Hamilton in the conference final. While Harris will chase a third straight Grey Cup crown, the Argos haven't won a CFL title since 2017.

"Last year was last year and I don't think we should dwell upon last year at all because each year is a different year," Harris said. "When we were playing 2019 to '21 (with Winnipeg), we were looking forward to the new season and getting rolling.

"That's the same mindset I have, 2021 was last year . . . we have to attack this on a clean slate and be as explosive and come together as much as we can because 18 games is a long season but you have to take it step by step."

The '22 campaign kicks off Thursday night with the Montreal Alouettes visiting the Calgary Stampeders, the earliest season start in CFL history. Toronto has a bye in Week 1 and opens June 16 at home against the Alouettes.

Winnipeg will chase a third straight Grey Cup title for the first time in club history. The Bombers will unveil their championship banner Friday night at IG Field before hosting the Ottawa Redblacks.

Harris is bucking the trend in the CFL, as over 65 per cent of players have returned to the team they played for last season. The vast majority of players in the league are veterans with only 78 (15.6 per cent) entering their first year.

Five clubs (Calgary, Saskatchewan, Winnipeg, Toronto and Montreal) will have the same starting quarterback as they had in 2021. And for the first time since '03, no rookie CFL head coaches will start the season.

Chris Rainey of the B.C. Lions is closing in on a league record. He's just 170 kick-return yards shy of passing Hall of Famer Henry (Gizmo) Williams (7,354) for the all-time lead.

For the first time since 2019, CFL teams will play a full 18-game schedule. That was made possible after the league and CFL Players' Association ratified a seven-year collective bargaining agreement following a testy negotiation that featured just the second strike in league history and first since 1974.

The league adopted some rule changes for 2022. Most notable is moving the hashmarks closer to the middle of the field and drives after a field goal or single starting from the 40-yard line rather than the 35.

Each hashmark will now be 28 yards from the nearest sideline instead of 24 yards. That means they'll be nine yards apart instead of 17. The league hopes the changes will improve game flow and boost offence.

The '22 season will feature a new but familiar face in Edmonton. Chris Jones is the club's head coach/GM following a stint with the NFL's Cleveland Browns.

Jones was Edmonton's head coach when it last won the Grey Cup in 2015. His starting quarterback that year was veteran Mike Reilly, who two years later was the CFL's outstanding player.

Reilly finished his 11-year career with the B.C. Lions (2019, '21) before retiring in the off-season. Sophomore Nathan Rourke, a Victoria native, becomes the Lions' No. 1 quarterback after making two starts last season.

Rourke is the first Canadian to enter a season as No. 1 since Gerry Dattilio did in '83 with Calgary.

There will be a new starter in Ottawa with veteran quarterback Jeremiah Masoli. He joined the Redblacks as a free agent following eight seasons in Hamilton, reuniting with GM Shawn Burke, who spent nearly 15 years in the Ticats front office before moving to the Canadian capital.

This report by The Canadian Press was first published June 8, 2022.