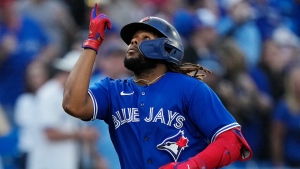 TORONTO - Vladimir Guerrero Jr. had a solo homer in the first inning and later added an RBI as the Toronto Blue Jays beat the Tampa Bay Rays 5-1 on Wednesday.

It was the 100th home run of Guerrero's career and he celebrated by drawing out the numerals with his fingers in the Blue Jays' dugout.

Bo Bichette, Santiago Espinal and Raimel Tapia all had RBI singles as the Blue Jays (81-62) added to their lead over the Rays in the tight American League wild-card race.

Toronto now has a 1 1/2 game lead over Tampa Bay and a half-game over the Seattle Mariners, who beat the San Diego Padres 6-1 earlier Wednesday.

Ross Stripling (8-4) earned a quality start and the win, going 6 1/3 innings, allowing just one run on three hits and striking out four.

Relievers Adam Cimber, Yimi Garcia, and Anthony Bass closed the door the rest of the way.

Harold Ramirez's home run was all the offence Tampa Bay (79-63) would get.

Drew Rasmussen (10-5) gave up four runs in as many innings on six hits and a walk. He struck out one. Josh Fleming allowed one run on five hits over his four innings of work.

Guerrero got to Rasmussen in the first, launching a fastball 365 feet to deep left field for his 28th homer of the season. It snapped a 14-game home run drought for Guerrero. His last round-tripper came on Aug. 30 in a 5-3 win over the Chicago Cubs.

The burly all-star struck again in the third inning when his fielder's choice scored Santiago Espinal from third base. In the next at bat, Bo Bichette singled to right field to cash in Jackie Bradley Jr. for a 3-0 Toronto lead.

Espinal tacked on a run in the fourth when his bouncing single found its way between Rays third baseman Yandy Diaz and shortstop Taylor Walls. As the Tampa infielders recovered the ball, Blue Jays catcher Danny Jansen ran home from third.

Tapia kept Toronto's momentum going in the sixth when his base hit dropped into centre field for a single. That scored Jansen from second to make it 5-0. Jansen had reached base on his second double of the game.

Ramirez cut into that lead in the seventh, hitting a solo home run off Stripling to lead off the inning. Ji-Man Choi grounded out to first in the next at bat but that ended Stripling's night. He got a standing ovation from the 24,282 in attendance at Rogers Centre.

LOURDES PROGRESS - Interim Blue Jays manager John Schneider said that outfielder Lourdes Gurriel Jr., would play some catch as he progresses from a left hamstring strain. He is scheduled to come off of the 10-day injured list on Sunday but Schneider said a lot would depend on how Gurriel is feeling this weekend.

ON DECK - Kevin Gausman (12-9) is scheduled to start in the finale of Toronto's five-game series against the Rays. Shane McClanahan (11-5) will take the mound for Tampa Bay in the 3:07 p.m. ET matinee.

This report by The Canadian Press was first published Sept. 14, 2022.