Walker sharp in Blue Jays debut, a 5-0 win over Orioles 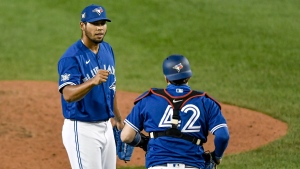 Walker (3-2), acquired from the Seattle Mariners in a trade two days earlier, allowed four hits and three walks and struck out four.

Walker pitched for the first time since learning that his father and siblings, who live in Lake Charles, Louisiana, lost their property and belongings in Hurricane Laura.

Relievers Ryan Borucki, A.J. Cole and Wilmer Font each worked an inning to preserve Toronto's first shutout since last Sept. 11 against Boston. The Blue Jays improved to 5-0 against the Orioles this season.

Guerrero singled off the left-field wall in the first inning to drive in two runs and Biggo's soft single made it 5-0 in the fourth. Toronto won its third straight game.

Anthony Santander and Jose Iglesias each had two hits for Baltimore, which lost its fourth straight.

Biggio reached base for a 21st straight game, tying Justin Turner for the longest streak in the MLB this season.

The Orioles and Blue Jays elected to wear their No. 42 jerseys for the rest of the weekend.

All big league teams wore the No. 42 on Friday night as a tribute to Jackie Robinson, who broke the colour barrier in Major League Baseball in 1947.

“We were given the option this morning and as a club we're going to wear the No. 42 jerseys for the next couple days,” Orioles manager Brandon Hyde said.

Orioles: RH reliever Shawn Armstrong was placed on the 10-day injured list (retroactive to Aug. 26) with a lower back soreness. RH Evan Phillips was recalled to take his place. ... Hyde said Iglesias felt no lingering pain following his start Friday night at DH, his first action since a stint on the IL with a left quad injury. Iglesias started Saturday at SS. ... RH reliever Hunter Harvey (shoulder) should be activated from the IL on Sunday or Monday, Hyde said.

Orioles: RHP Jorge Lopez (0-0, 8.38 ERA) gets his first start with the Orioles on Sunday. Lopez has pitched in three games out of the bullpen for Baltimore since being signed off waivers from Kansas City earlier this month.

Blue Jays: RHP Tanner Roark (2-1, 4.91 ERA) will start Sunday in the third game of a four-game series against Baltimore.