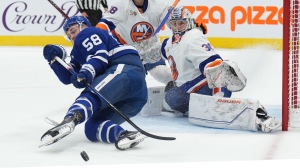 Toronto Maple Leafs left wing Michael Bunting (58) is awarded a penalty shot as he taken down by New York Islanders defenceman Alexander Romanov (28) in front of Islanders goaltender Ilya Sorokin (30) during second period NHL hockey action in Toronto on Monday Jan. 23, 2023. Bunting did not score on the penalty shot. THE CANADIAN PRESS/Nathan Denette

John Tavares, with a goal and an assist, Calle Jarnkrok and Auston Matthews also scored for Toronto (29-11-8), which got 31 saves — and a key setup — from Ilya Samsonov. Justin Holl added two assists.

Down 2-1 in the second period, Toronto evened things up on a power play at 7:53 when Samsonov caught the Islanders on a long change with a stretch pass. Nylander quickly fed Tavares, who moved in alone and backhanded his 21st goal of the season upstairs against the team that drafted him first overall in 2009.

The Leafs, who lost 3-2 in overtime to the Islanders on the same ice on Nov. 21, then took their first lead 1:40 later when Nylander used a delicate flip pass to send Jarnkrok in alone to score his 11th.

Sorokin stopped a Michael Bunting penalty shot later in the period, but Nylander buried his second of the night and 26th overall at 16:32 after stealing the puck from Scott Mayfield in the offensive zone.

Matthews put things to bed with his 25th at 7:44 of the third on a breakaway off a Holl pass.

New York, which has dropped below the playoff cutline, opened the scoring with 22.2 seconds left in the first when Lee swatted home a loose puck in the crease for his 16th after Brock Nelson's shot glanced off the Samsonov's shoulder and hit the post.

The Toronto goaltender was sharp on a number of chances earlier in the period, including a terrific blocker stop at full stretch on Casey Cizikas.

The impact was almost immediate.

Toronto tied it at 5:07 of the second when Nylander ripped his 25th off the rush after a nice play from Tavares, but Lee restored New York's advantage 1:10 later on a one-timer that fooled Samsonov before the home side pushed back.

SAMSONOV ON A RUN

The Russian made his third straight start and fourth straight appearance. Samsonov entered Monday with a 14-4-2 record and a .919 save percentage, while Matt Murray was 11-5-0 with a .911 save percentage as part of Toronto's two-headed goaltending monster. "We're into the second half of the season," Keefe said. "It's important to give guys the opportunities when they've earned it. Matt will be ready when he gets back in."

Leafs defenceman T.J. Brodie took part in his first on-ice session with teammates since suffering a rib injury earlier this month. Keefe said the blueliner won't be available until at least Friday when Toronto hosts Ottawa. Brodie has been limited to just 28 games in 2022-23 after also suffering an oblique injury in the fall.

The Leafs opened a season-long five-game homestand and will play nine of their next 10 — a stretch broken up by the all-star break — at Scotiabank Arena. "What I like about it is the playoff-like schedule where you're playing every other day," Toronto defenceman Morgan Rielly said. "It's your chance to put yourself into a rhythm. But there's not a ton of time to get on the ice between games or time to have long practices. If your game isn't tight in the right place, it can be difficult to get there."

This report by The Canadian Press was first published Jan. 23, 2023.