Yankees get slugger Encarnacion in trade with Mariners 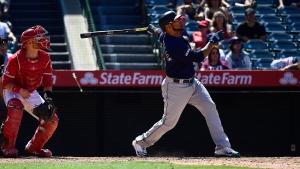 CHICAGO - Edwin Encarnacion will find himself in a familiar spot after he joins the Yankees in New York on Monday.

The AL East leaders acquired Encarnacion for a minor league pitcher in a late-night trade with Seattle. Boone said he expects Encarnacion to be available when the Yankees open a three-game series against the Tampa Bay Rays.

“We're talking Edwin Encarnacion,” Boone said before Sunday's game in Chicago against the White Sox. “When you get a guy of his calibre, that's something we're excited about. He's obviously a great hitter, he has been for a long time and continues to be.”

“Just looking forward to adding him and just adding some more length to our lineup with not just a feared hitter, but also a good hitter,” he said.

The Yankees added Encarnacion to what could be one of the most powerful lineups in the majors when Aaron Judge and Giancarlo Stanton return from injuries.

Tampa Bay owes the Mariners $5 million on Aug. 1 from the three-team trade that moved Encarnacion from Cleveland to the Mariners last December.

New York sent 19-year-old minor league pitcher Juan Then to Seattle. He formerly pitched in the Mariners system and will start out in Class A.

Encarnacion has hit 21 home runs this season and has averaged 37 homers and 109 RBIs in his last seven years.

Boone said Stanton could return Tuesday after being sidelined by biceps, shoulder and calf injuries. Judge also is inching closer after he strained his left oblique in April. Both stars are on rehab assignments in Triple-A.

“Encarnacion, Stanton and Judge, that's three elite power hitters plugged into our lineup,” Boone said. “Hopefully it's something over time that creates a big-time advantage for us.”

Encarnacion is hitting .241 and is among the league leaders with 49 RBIs and 48 runs scored. He has 401 career home runs, including 18 in 69 games at the new Yankee Stadium.

The Yankees are Encarnacion's fifth major league club. He started with Cincinnati in 2005 and later played for Toronto.