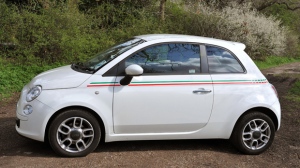 In 1957, Fiat introduced the world to the 500, a cute, affordable city car that would define its genre for decades. The well-received revival model of 2008 became a huge sales success in no time. It was no surprise then to see it mark Fiat’s return to the North American market when it arrived here in 2011. For 2015, the 500 has matured into a more diverse lineup which, on top of the base model, now includes the Cabrio, the high-performance Abarth, and the midrange Turbo, all of which are now available with both automatic and manual transmissions.

It’s not hard to see why so many people are just smitten by the 500. Its retro, yet modern appearance is not just cute and charming; it’s full-on stylish in a chic Italian sort of way. Its simple, posh appearance, combined with its diminutive footprint, practically makes it a fashion accessory, albeit a slightly more extravagant one than your Valentino whatever.

The Turbo takes things one step further by adding in a few Abarth touches like a sporty front and rear facia, and the Sport model’s two-tone 16 inch wheels. Don’t think for a moment, however, that the Turbo designation ends with a few frilly cosmetic add-ons. Oh no. Under the hood, the base 500’s 1.4L, 4-cylinder engine gets a healthy shot of adrenaline in the form of a turbocharger, which ups the power from 101 to 135hp. That may not sound like a whole lot, but in a car as small and light as the 500, it’s a sizable increase.

The lively engine has more than enough punch and overtaking ability to make-up for any shortcomings of the base model’s modest power output. The added power is also a great match to the 500’s spirited handling and firm suspension, which, though contributes to a somewhat bouncy ride, makes for one entertaining drive.

My main concern with the Turbo is that, out on the highway, where turbochargers are at their best in terms of performance and reliability, the 500 feels a bit out of its element. There’s no hiding that the 500 is susceptible to crosswinds and has a hard time finding its groove. In fact, depending on how windy it is out there and how many trucks surround you, driving a 500 on the highway can be rather frightening.

In truth, the 500 feels most at home on the city streets where it belongs and, unfortunately, where the added power of the Turbo may go underappreciated. That may make the lower-end Pop and Sport models a smarter buy, not just for their lower purchase prices – the Pop starts at $14,495 whereas the Turbo starts at $18,895 – but for their naturally-aspirated engines, which would likely perform more reliably than the Turbo under typical stop-and-go city conditions.

The 500 is certainly not a car you can easily rationalize. The driving position is too awkward, what with its high seat, offset steering wheel, and cramped foot well. The backseats are only suitable as a torture zone for children and short adults over long trips. And based on initial quality reviews from Consumer Reports, long-term reliability is looking a little shaky.

The Honda Fit then, by any rational and measurable method of analysis, is the better hatchback without question. You can buy one with the peace of mind that it won’t ever go wrong or drive you mad. The problem is, being devoid of soul and character, it won’t excite you either. If style, character, and overall charm are all non-negotiables, then consider the 500 a priority test drive.