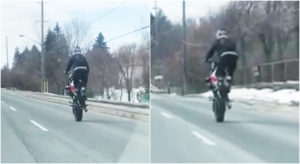 Police are speaking out about the dangers of stunt driving after CTV News Toronto obtained a video which appears to show a motorcycle rider travelling on a single wheel in Markham.

The incident is believed to have occurred on Sunday afternoon in the Highway 7 and Markham Road area.

In the 36-second video obtained by CTV News Toronto, the motorcycle rider can be seen standing on the tail of the bike while travelling along the road with their front wheel in the air.

The video then appears to show the rider stepping onto the seat of the bike while it was still in motion.

In a statement provided to CTV News Toronto, York Regional Police Sgt. Andy Pattenden said that what is depicted in the video is not only illegal but dangerous.

“Operating a motorcycle in a careless fashion like that is illegal. It would be a violation of the Highway Traffic Act for either Careless Driving and/or Stunt Driving. In the event that the motorcycle crashed causing damage or injury to anyone else, that kind of driving behaviour may warrant a criminal charge of Dangerous Driving,” he said.

The motorcycle rider seen in the video was not apprehended following the incident, however Pattenden said that anyone who witnesses something similar should “try and note the licence plate and call police.”