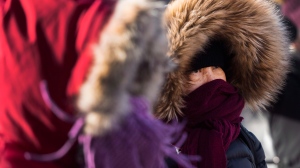 People wait to cross a street in Chinatown during a cold and windy day in Toronto on Thursday, January 10, 2019. The city declared an extreme cold alert. THE CANADIAN PRESS/Nathan Denette

Torontonians will see some relief from bitterly cold temperatures this afternoon but another deep freeze is headed our way.

On Friday morning, Toronto saw the mercury hit -21 C, the lowest temperature the city has seen this winter season.

With the wind chill, it felt closer to -30 this morning.

Although the temperature is expected to climb to a high of -8 C today, frigid weather is waiting in the wings.

Early Saturday morning, Environment Canada is forecasting that the temperature in Toronto will plummet to -17 C with wind chill values around -25.

The city’s medical officer of health issues extreme cold weather alerts when the daily forecast suggests temperatures will reach approximately -15 C or colder, or when the wind chill is forecast to reach -20 or colder.

In addition to year-round 24-hour respite sites already open across Toronto, a warming centre is open at Metro Hall. It will remain open until noon on the day the alert ends.

Public health officials are urging members of the public to check on vulnerable family members, friends, and neighbours.

Those at the greatest risk of cold-related illnesses are people experiencing homelessness, those who work outdoors, elderly people, infants, and those with pre-existing heart of respiratory conditions.

Gordon Tanner a spokesperson for the city’s Shelter, Support, and Housing Administration department, said the number of outreach teams on Toronto streets have been doubled in light of the cold.

“Our focus really changes when an extreme cold weather alert is called. (We want to) really be out there on the street connecting with people, letting them know about the dangers of being outside and to do our best to bring people inside and get to a warm place as quickly as possible,” he told CP24 on Friday.

“We put out a notice to all of our shelters and drop-ins just to sort of relax their occupancy pressures with the goal of keeping people inside and safe from the weather.”

Warmer weather is on the horizon on Saturday afternoon. Environment Canada says Toronto will see a high of around -1 C later in the day tomorrow.

People wait to cross a street in Chinatown during a cold and windy day in Toronto on Thursday, January 10, 2019. The city declared an extreme cold alert. THE CANADIAN PRESS/Nathan Denette 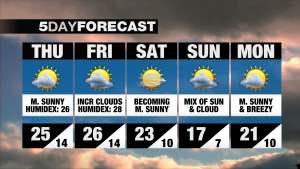 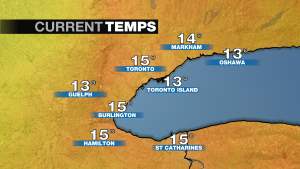 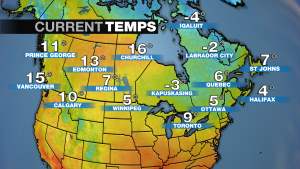