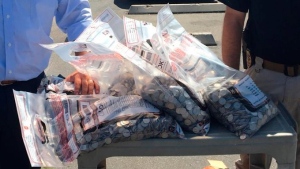 This undated photo provided by the Bakersfield Police Department shows $6,000 worth of quarters that was found in a baby stroller. Bakersfield police officers noticed a woman on Friday, Sept. 20, 2019 struggling to push the stroller but quickly realized there was no baby inside. Police then investigated and discovered the quarters, which 29-year-old Darrin Fritz had allegedly just stolen from a home. (Bakersfield Police Department via AP)

BAKERSFIELD, Calif. - Authorities say a woman stole $6,000 worth of quarters and her getaway car was a baby stroller.

Bakersfield police officers noticed the woman Friday struggling to push the stroller but quickly realized there was no baby inside, according to the Bakersfield Californian .

Police discovered the quarters, which 29-year-old Darrin Fritz is alleged to have stolen from a home, the newspaper reported. Fritz allegedly tried to flee from the officers.

It was not immediately clear if Fritz had an attorney who could speak on her behalf.